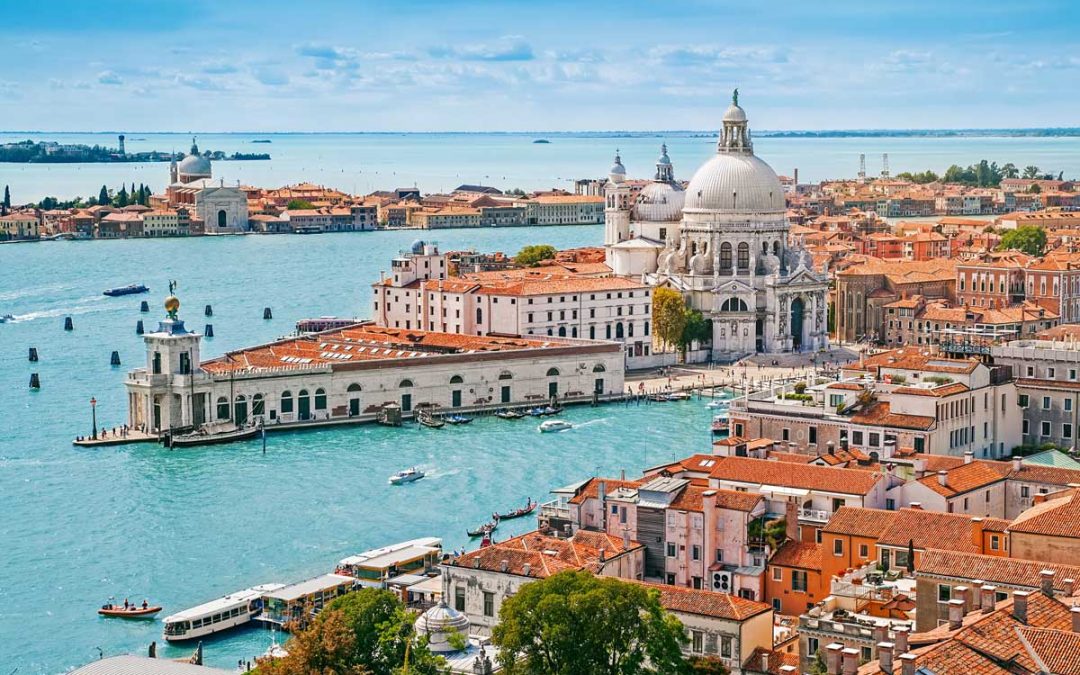 Venice first came about due to people fleeing barbarian sackings along the Adriatic Coast in the 5th-8th Centuries BC. Out of fear people transferred themselves to the swampy lagoon islands. The only way to live here was on wooden plinths stuck into the swampy grounds. All in all, these were extremely dangerous conditions ripe for becoming breeding grounds of disease.

As more populations moved here, federations of sorts, with elected representatives, started to form. The area was, however, still under Byzantine rule, and it wasn’t until the late 8th Century that Venice had an opportunity to overrule these with their own Doge. These elected dukes continued to rule the city for another 1000 years. To build its wealth, Venice agreed to join the crusades on behalf of the Franks. On not receiving the agreed upon fee, the Venetian mercenaries simply took the treasures from the land they had invaded on behalf of the Franks.

For many centuries, Venice and Genoa fought intensely over sea power, both being major names on the Mediterranean trade routes. This all changed in the 1400s, when several events turned things in favor of Genoa. The turks took control of the Adriatic sea, the Cape of Good Hope was discovered as was America. This not only opened up new trading opportunities but also new routes that would allow boats to steer clear of Venetian waters and their taxes and duties.

This is when the cultural city we know today started to come into shape. If they could not prove their importance in trade dominion, they would certainly do so as one of the best-loved havens for wealthy pleasure-seaking persons across Europe. Within less than a century Venice had re-established itself, now renowned for its prostitutes, its music and its art. All the while, the city was passed back and forth between France and Austria depending on who was currently winning their wars! In 1866, Venice joined the Kingdom of Italy and soon became more industrialised as part of a unified country.

Today, Venice has only 60,000 official inhabitants, a number easily surpassed by visitors to the city every year. Famous still for its art, you can find this in its many churches and galleries. In fact, every two years the world-renowned Biennale takes place over Spring and Summer, with a plethora of exhibitions taking up residency in this art city. Venice is also home to an internationally-respected film festival. This is not, however, all the city has to offer. Its extravagant carnevale, its unique cuisine and its labyrinth of islands and canals make for a truly singular experience. Our Venice city guide can be a good place to start to get the most out of the characteristic and proud Serenissima. 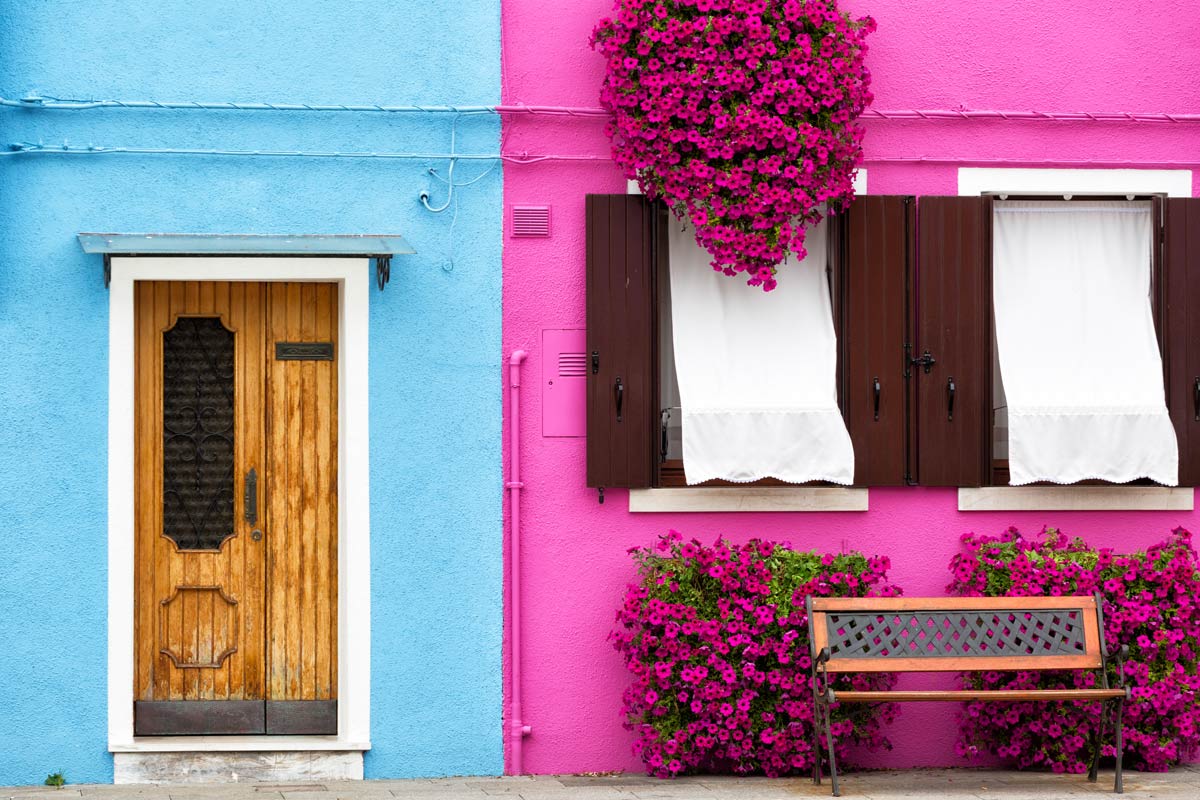 As with many Italian cities, one of the best ways to take in the atmosphere and the cityscape is simply by walking around. This allows you to take in the many palazzi built for the high and mighty in Venice’s heyday. Some of the palazzi to look out for include the Palazzo Mocenigo, Palazzo Grimani and the Ca’ d’Oro. These and many others are now art exhibition spaces that display different artists throughout the year. One such palazzo is the Palazzo Grassi, an 18th-century structure on the Grand Canal. This actually belongs to François-Henri Pinault, the renowned art collector and curator. He often dedicates this space to a single artist, and has commissioned the excellent Tadao Ando to create minimalist interiors. Pinault also owns the Punta della Dogana, another great art space, and tickets to this allow entrance for both.

A more famous art gallery is the Peggy Guggenheim collections. On display here you will find Picasso, Magritte, Ernst, Giacometti and Pollock, making for a wide-ranging and interesting viewing. Art aside, there are many other museums that can entertain all the city’s visitors. Amongst them you will find the Museo Querini Stampalia, Museo Correr, Museo Storico Navale to name just a few. Some of the old art and music schools of Venice that you can now visit include the Scuola Grande di San Rocco and the Scuola di San Giorgio degli Schiavoni. Again, many of these are art spaces or museums.

Staying outdoors, the island of Burano is definitely worth a visit. The charm of this district lies in its enchanting, vibrantly-colored houses that line its canals. The area is also famous for its lace. Here, you can take a stroll, taking in the different colors, and stopping in shop windows to see the many variations and reinventions of its traditional craft of lacework.

Another district to explore is the Ghetto Ebraico, or Jewish Ghetto. This area is not the only one of its kind in Italy, nor was it the first of its kind within Venice. The ghetto we think of today first came about under the Venetian Republic. In the mid-16th Century, all Jews were forced to live here. Near the end of the 18th Century the ghetto was dissolved. Today you can walk through it on a self-guided or guided tour. These are extremely interesting and offer a unique insight into Jewish culture in confinement as well as how it thrives today. 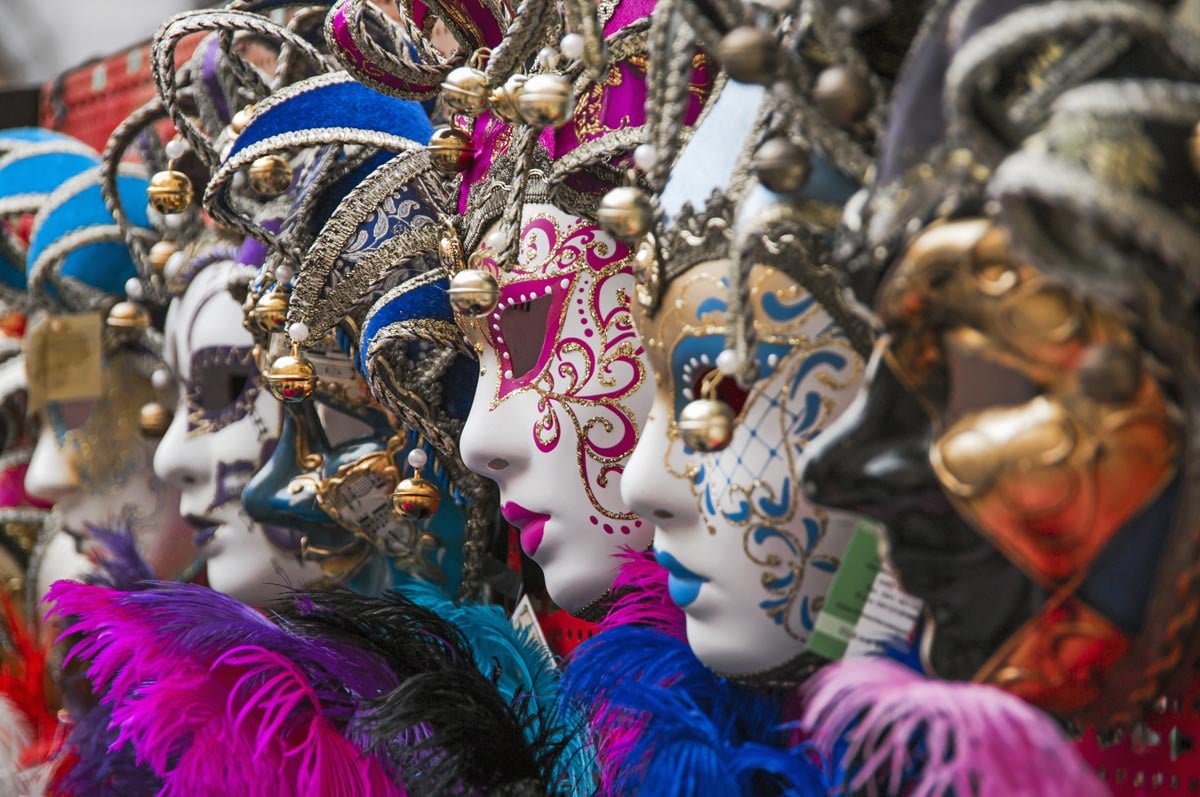 The first thing anyone thinks of when they hear the name Venice is, of course, its canals. More significantly, along these canals glide its traditional gondolas. A trip to Venice simply isn’t over until you have taken a ride in one of the traditional boats. These should all follow a set rate, so make sure to research what that is for your visit before coming. A trained gondalier will steer these gondolas, which hold up to 6 people. This is one of the best ways to take in the city, given that this tradition is such a great part of its identity.

If you time your visit to La Serenissima right, you can also take part in the celebrated Carnevale festival. This runs every year in the weeks running up to Ash Wednesday, which marks the beginning of the Lent period that precedes Easter. An easy and cheap way to take part in these celebrations is admiring the gondola parade down the canal. Locals in traditional carnevale costumes will take to the waters in a magnificent and extravagent display in honor of days gone by.

Throughout this time you will see such locals wandering the streets and standing at corners in a great show of almost exhibitionist pride in their cultural history. It is acceptable to ask for pictures with these characters, but make sure to be polite about it – they won’t expect money but they will expect manners! There are many other events on at this time, from opulent balls to concerts and recitals.

To really delve into the history of this magical city, you can also take yourself on a tour of the many different churches around the lagoon. In fact, the founding of the city is very much inextricable from its churches, especially the Chiesa di San Giacomo. Sitting in the Rialto district, the dedication of this church is traditionally thought to be the founding of Venice as we know it today. Other churches you shouldn’t be overlook include I Frari, Santa Maria dei Miracoli, Santi Giovanni e Paolo, San Zaccaria, and Santa Maria Assunta. Of course, any tour should culminate in the magnificent Basilica di San Marco on the glorious Piazza San Marco. This is Venice’s cathedral and is as famous as its canals! Within you will find beautiful architecture, Byzantine mosaics, fresco cycles and paintings.

There are also a great many things you can do to immerse yourself into local rituals. Why not take an aperitivo at one of the many canal-side cafés? A particularly nice area to do this is the Murano district, where you can also see the famous Murano glass being blown into shape. Alternatively, take yourself to Rialto and its bustling, lively market. Another option is to make a picnic and head towards the Giardini Publici, or Public Gardens. Here you can sunbathe on the lawns and people watch, lose yourself in a book, or relax with friends. 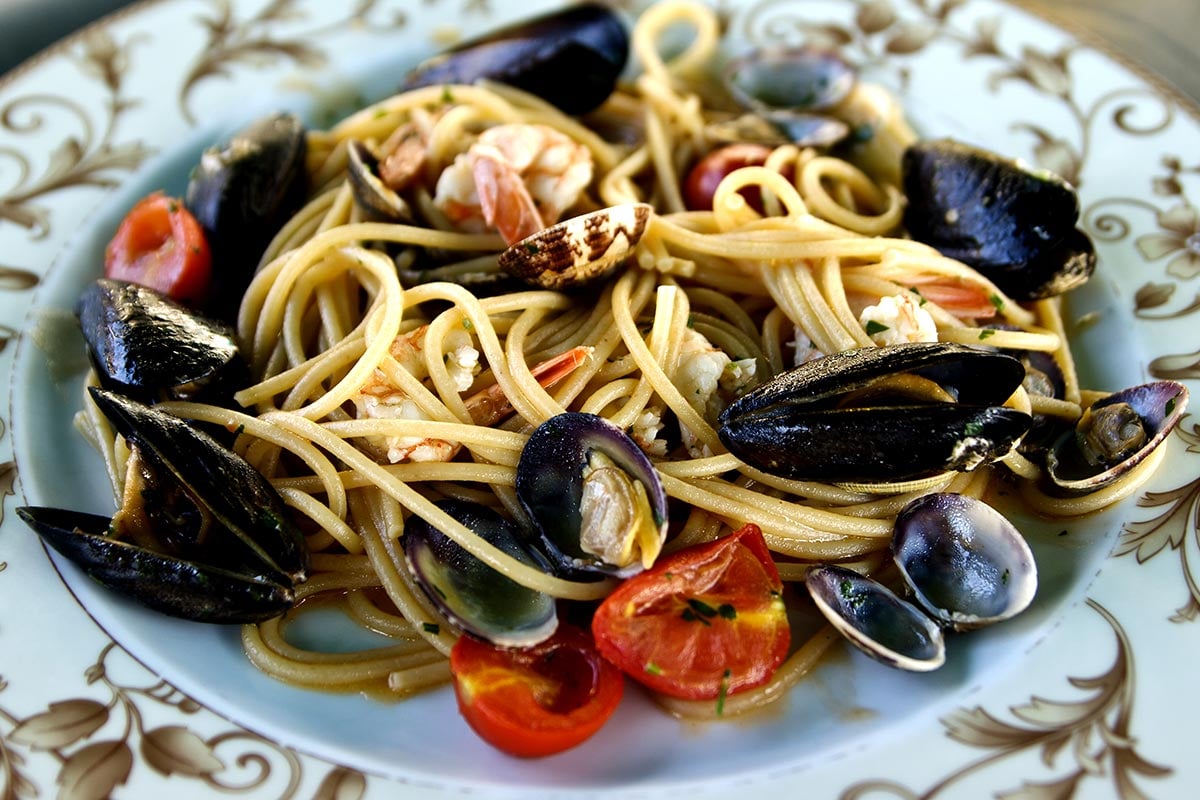 Venice is the capital of the Veneto region, famous for its very particular cuisine. Unsurprisingly, much of what you find in Venice is seafood, though its sweet treats are also delicious. A typical dish here is the Sarde in Saor, a dish consisting of fried sardine fillets in a marinade of onions, raisons, pine nuts and vinegar. This dish dates back to Medieval times and was originally a preservation technique that Venetian fishermen used. Another such historical dish is the Risi e Bisi. Peasants traditionally offered this to the masters on a special feastday. You could liken it to a risotto swimming in broth and with peas and pancetta.

For a lunch stop you might consider some Folpeti. These are baby octopus that are boiled in a broth and seasoned with olive oil and lemon juice. You usually eat them as part of a sandwich. Alternatively, you could opt for Baccala Mantecato which is a paste of dried cod that is re-soaked, poached and creamed into a mouse with oil. You can usually eat this on fresh bread or grilled polenta.

Come dinner you can enjoy a meal of Fegato alla Veneziana or Risotto al Nero di Seppia. The former ‘s centerpiece is a calf liver, which the cook boils in onion broth. The latter is risotto stained black with squid ink! Alternatively, for a taste of Moleche which are small green crabs only available in the Spring. In fact, these are quite the delicacy, as it is so hard to catch the crabs at the right time. It is essential to catch these animals just after they have shed their shells, before they re-enter the water and their new shell hardens.

If you are in Venice for carnival, you must not miss the indulgent fritole. These are small, donut-like pastries with pine nuts and raisins. They strictly belong to the festival so you won’t find them year-round. 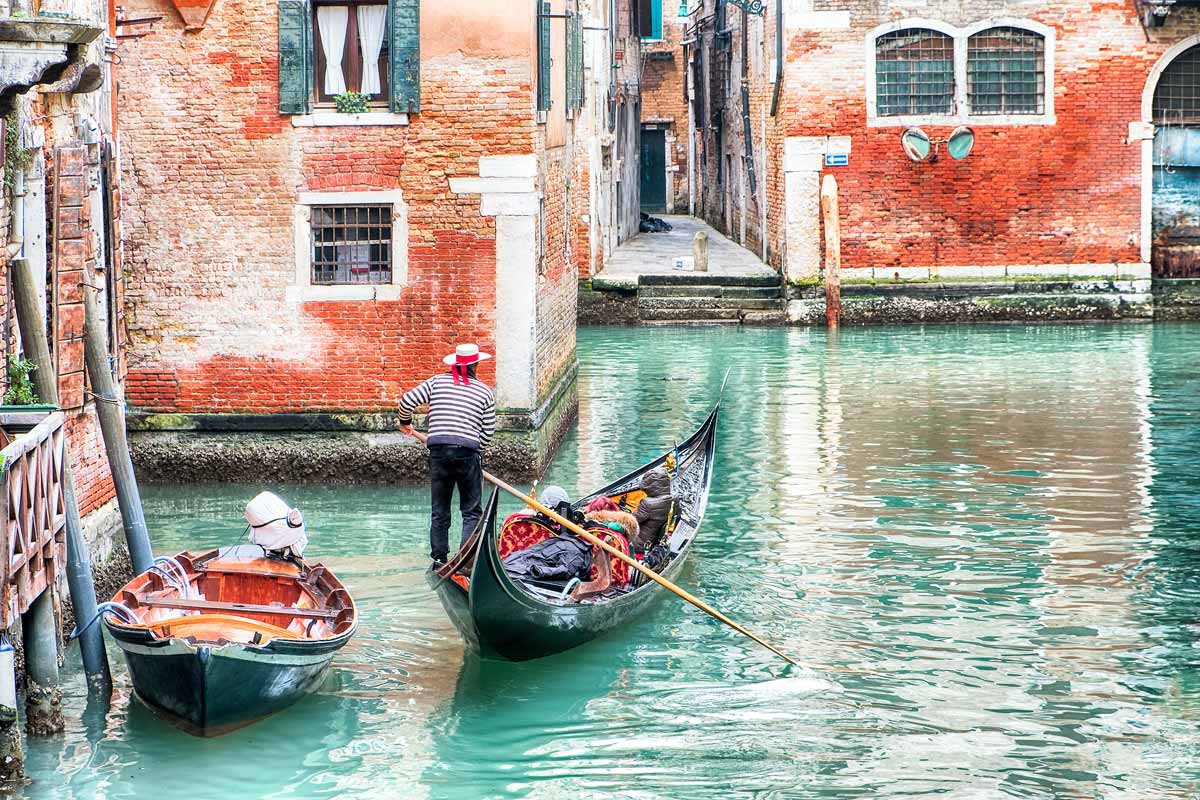 Though Venice is riddled with canals, there are always walkways that will allow you to navigate between them. Alternatively, you can take the frequent vaporetti boat taxis. These will take you to the islands in the lagoon and across the town. Such taxis are a convenient and quick way to get across the city. They will also allow you to view the city from the sea, making for an unbeatable perspective.

Venice’s mainland has its own airport in Venice Marco Polo, which receives and provides international connections. Similarly, from the mainland you can make use of the many connections that serve Venice’s central station. From within Italy you will also find several bus connections to the city, and many from within the Veneto region, of which it is the capital.