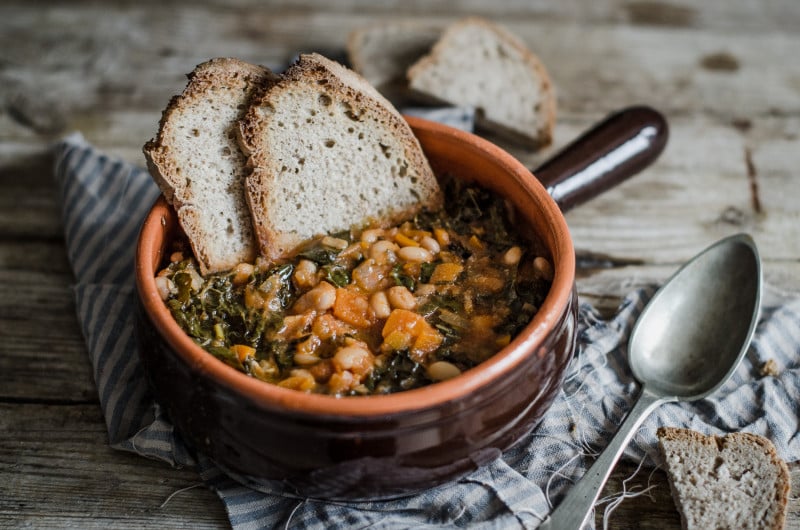 Italy is known for its culture, history, architecture, and of course — delicious food. Restaurants around the world try to imitate the style and flavors of Italy, but nothing quite compares to authentic Italian cuisine. Though the uninitiated may not be able to differentiate between foods in various regions of Italy, every part of the country has its own distinct flavors. This is especially true of Tuscan food.

Both travelers and locals can’t help but fall in love with the wonders of Tuscany. From the enchanting Renaissance art in Florence to the crystal-clear waters of Forte dei Marmi, Tuscany has a little something for everyone. However, you can find one of Tuscany’s best-kept secrets in kitchens and restaurants across the region. Tuscan food is simple by design, but full of flavor and completely different from the cuisine in other parts of the country.

Today, we’ll take a look at the top ten local dishes in Tuscany. But first, we must identify the qualities that make Tuscan food unique. What’s so special about Tuscan food and what differentiates it from the food in other regions of Italy?

What is Tuscan Food?

It’s important to note that Tuscany features a lot of variety in its dishes. That said, there are several qualities that can help travelers identify authentic Tuscan food. Once you’ve sampled delicacies from around the country, you will see how much Tuscan food stands out.

Historically, Tuscan food has been shaped by the concept of cucina povera. This translates to “poor cooking,” and was the primary form of sustenance among the working classes in Tuscany. Today, the tradition of cucina povera is alive and well, and is the foundation of all Tuscan cuisine.

Though the old days of widespread poverty are long gone, Tuscan chefs continue to use simple, minimalistic recipes for the vast majority of their dishes. The ingredients are fresh and natural, reflecting the beauty of Tuscany’s land and bountiful resources. When you order food at a Tuscan restaurant or have the privilege of partaking in an authentic home cooked meal, you’ll get to enjoy all the local ingredients from the region.

While some Tuscan cooks rework dishes that are popular around the country, many recipes are hyper-local and distinctive. In any case, there are a number of dishes in Tuscany that every visitor needs to try. So, to get your Tuscan vacation off on the right foot, let’s look at the top ten local dishes of Tuscany:

Pappa al Pomodoro is a local favorite in cities like Florence, Pisa, and Lucca. The dish is a thick, bread-based soup with tomatoes, olive oil, basil, and garlic. Your experience will vary greatly based on where you order your pappa al pomodoro, as many chefs add additional fresh vegetables or seasonings. While pappa al pomodoro is generally served hot or at room temperature, it can also be eaten chilled. Be sure to try some great pappa al pomodoro at Cibrèo Trattoria in Florence. 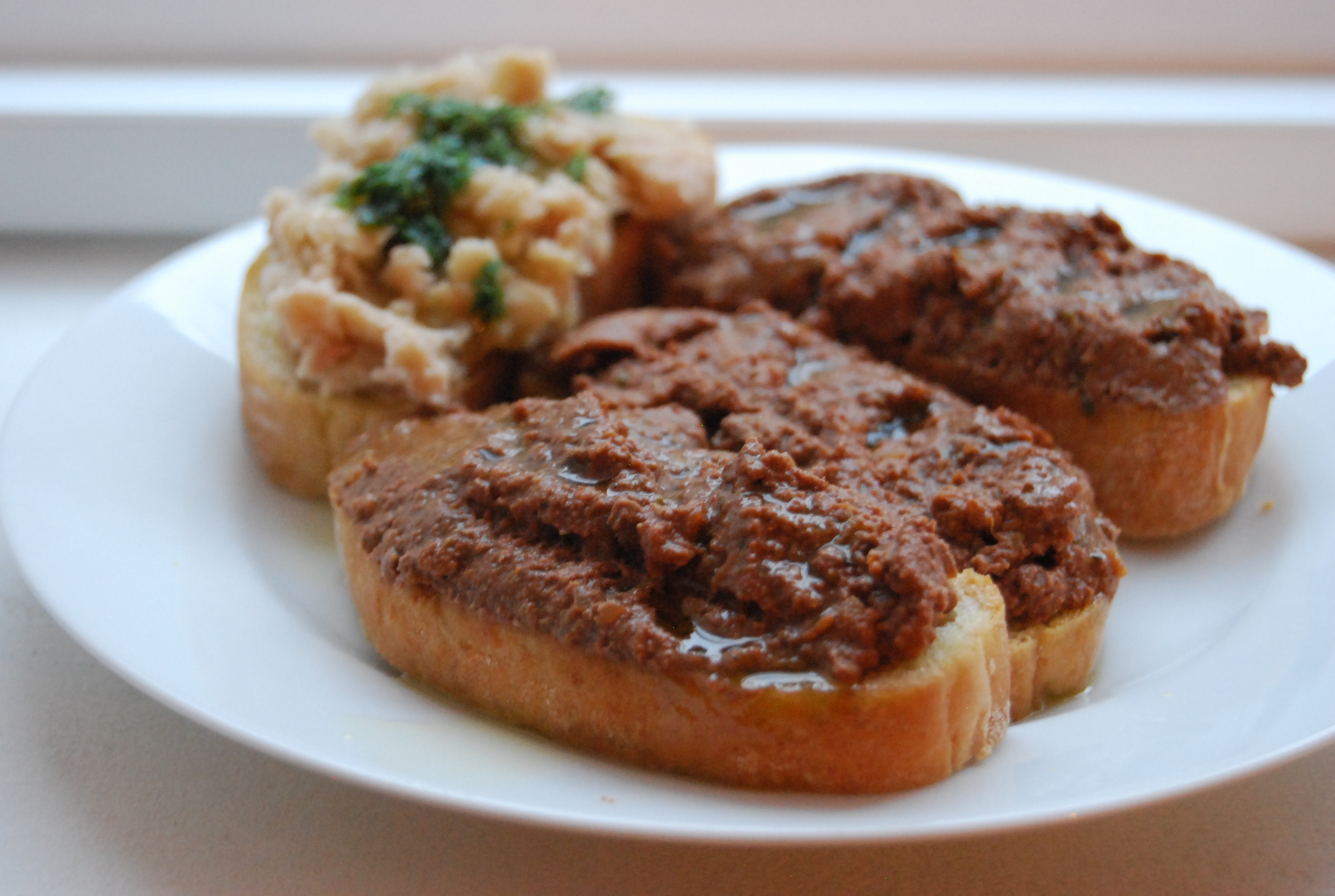 Many of the best Tuscan foods are simply appetizers before the main course. However, don’t be fooled by their simplicity, as dishes like crostini di fegato are rich and extremely satisfying. Crostini di fegato consists of thin slices of warm or toasted bread, topped with freshly-made chicken liver pâté. Though the exact ingredients may vary, the chicken liver pâté is generally made using butter, capers, and onions.

Ribollita is another bread soup that is both delicious and a staple of Tuscan cuisine. This hearty soup is chock-full of vegetables, including (but not limited to) cabbage, kale, celery, carrots, and potatoes. Generally, Tuscan cooks use leftover or stale bread to make the soup. This was originally done as a way to use old bread that would have otherwise been thrown out. Though the precise origins of ribollita are unknown, food scholars believe that the recipe dates back to Tuscan peasants of the Middle Ages.

While the majority of dishes on this list are simple in nature, pappardelle alla lepre is a bit more complex. The pasta is flavored with hare meat, which must first be marinated in wine and herbs. The process to marinade and cook the hare meat is extensive, but the end result is a savory dish that tastes like no other. If you’re touring Lucca and have some free time, you should stop by Ristorante Buca di Sant’Antonio for some of the best pappardelle alla lepre in all of Tuscany. 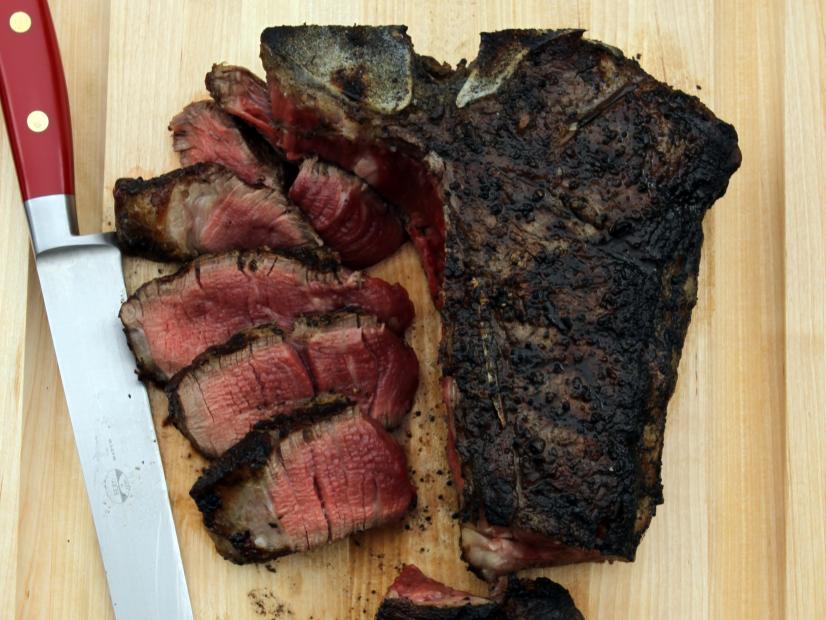 Are you searching for the perfect Tuscan dessert to pair with your meal? If so, you should head over to the nearest bakery in Siena or San Gimignano for a taste of castagnaccio, a traditional autumn dessert. This cake is made with flour, chestnuts, pine nuts, and raisins. You’ll probably need to be in Tuscany during the autumn months to sample this rare treat, but it is well worth it. Castagnaccio is often served with coffee or a sweet wine to bring out its subtle flavors. 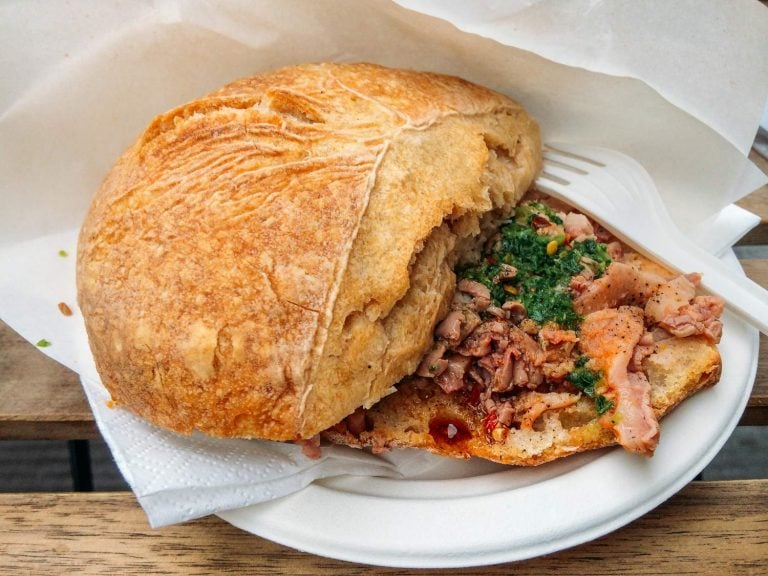 If you want to grab a quick bite to eat while touring Tuscany, the lampredotto sandwich works great as a simple mid-afternoon snack. Lampredotto is the fourth stomach of the cow, which serves as the primary ingredient in this dish. The stomach is cooked in a broth and mixed with salsa verde, before being served between two slices of freshly baked Italian bread. The idea of eating cow stomach may not be for everyone, but for more adventurous eaters, the lampredotto sandwich is a must-try. 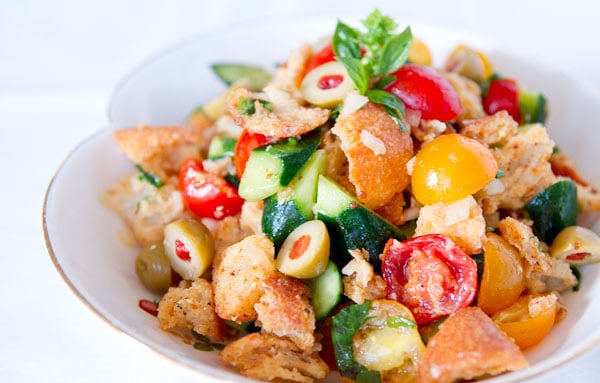 If you hadn’t already noticed, bread is a primary ingredient in many kinds of Tuscan food. Panzanella is a traditional bread salad served throughout the region. Despite its unique flavors, panzanella is relatively easy to make; it only requires small chunks of bread, tomatoes, basil, onions, vinegar, olive oil, and salt. Panzanella is often served as a complement to the main course.

Popular on the coastal towns and cities of Tuscany, cacciucco is a traditional fish stew. The recipe implements several different kinds of fish and shellfish, and the exact ingredients can vary depending on location and availability. Though the dish and its name were originally derived from a similar Turkish recipe, cacciucco has been an important part of the Tuscan diet for well over a century. If you get a chance to go through Livorno, be sure to stop in at La Pina d’Oro for some excellent cacciucco. 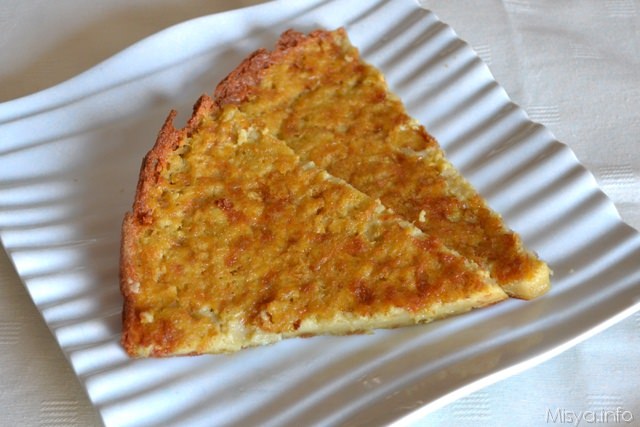 No list of Tuscan food would be complete without torta di ceci. This popular street food was created in Livorno, though it can be found throughout Tuscany. Torta di ceci is a savory cake made with chickpea flour. If you’re feeling particularly hungry, it is also common to make a sandwich by putting the torta di ceci between two pieces of focaccia bread. Whether you want a quick snack on-the-go or a delicious appetizer, the torta di ceci is one of the best savory cakes in all of Italy.

Learn More about Tuscany with SopranoVillas

Are you planning a trip to Tuscany, but need help with your itinerary? Thankfully, SopranoVillas is here to help. At SopranoVillas, we can provide you with the information you need to find the best Tuscan food, wine, tours, and accommodations. Consult our website for more information!