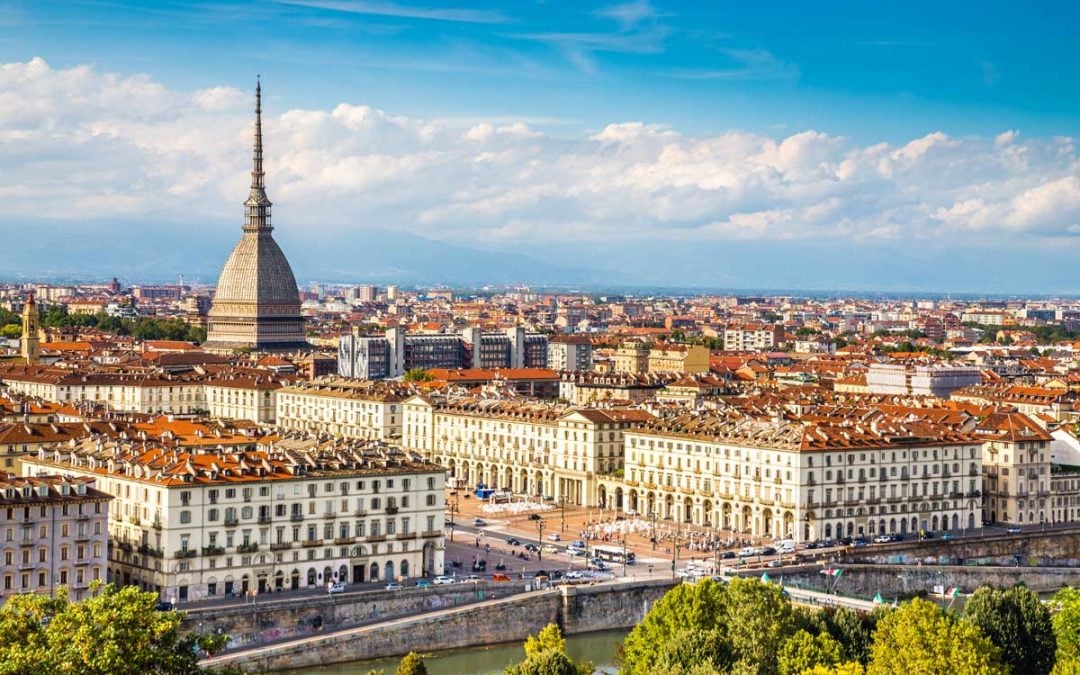 Italians know the Turin as a city of great cultural importance. This Turin city guide is the perfect way to discover all its wonders, even though the city itself is not as famous internationally as others on the peninsula. Not only was this the first capital of a unified Italy, but this city is the birthplace of gianiuotti chocolates, and Italian cinema. It moreover sometimes bears the name “cradle of Italian liberty”. This is because some of the Italian Risorgimento’s key players came here to discuss ideas. Camillo Benso (Cavour) and Vittorio Emanuele II were both born here. They went on to become Italy’s first prime minister and king respectively.

Even before the late 19th Century, however, Turin was a center for literary, political, and philosophical thinkers. Part of the inspiration of this city perhaps lies in its beautiful surroundings. Lying far to the north of Italy, it borders the Alps on two fronts, though the city itself is on a flat plane. This makes for a dramatic backdrop to the city, as the majestic mountain range looms over its streets. Such is its picturesque qualities, that Le Corbusier was moved to describe it as “the city with the most beautiful natural location in the world”.

The origins of the city aren’t exactly known. That said, the earliest remains found here belong to Paleolithic and Neolithic settlers, which were then superseded by Ligurian and Celtic tribes. These in turn were conquered by the Romans under Augustus, who reigned 63BC-14AD. During this era Turin bore the name Augusta Taurinorum, and the grid city design popular amongst the Roman Empire is still visible to this day.

One of the most important families to rule over this city is the House of Savoy. They took control in the mid 1500s and it was under their rule that the region became known as Pedemontum due to its geographical position as detailed above. This name slowly evolved into Piemonte as Standard Italian became more commonplace.

Though it is not amongst the most well-known cities of Italy, it is in many ways one of its most interesting and important. It is one of Europe’s capitals of contemporary art, and is still an important center for technology and industry. For example the FIAT factory sits here, the initials actually standing for Fabbrica Italiana Automobili Torino. Its proximity to the Alps also lends it a versatility that earned it the name of host of the 2006 Winter Olympics. Turin is a city of understated grandeur, arcaded mansions and refined eateries, serving up some of the very best and irreplicable dishes in Italy. 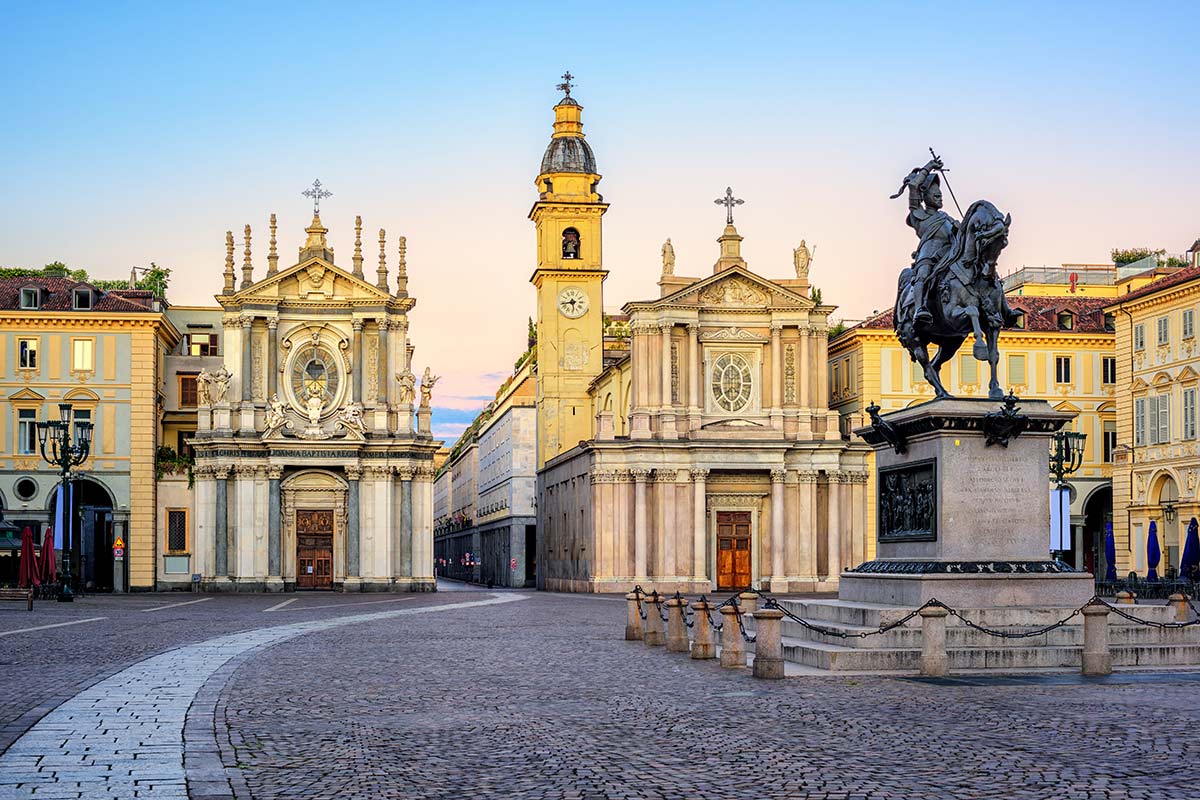 The gorgeous baroque architecture defines this city, headed up by the House of Savoy. In particular, the works of Guarino Guarini and Filippo Juvarra are quintessential of this city. The former created the famed Cappella della Santa Sindone, built to hold the Holy Shroud. This chapel unfortunately suffered great damage in a fire in the late nineties, meaning it is currently still in restoration, but can still be visited. Guarini also designed the Chiesa di San Lorenzo, a breathtaking medley of marble, stucco and frescoes. The dome of this church is one of its highlights.

Juvarra, on the other hand, brought a certain Sicilian sensibility with his baroque. You can see this in his Palazzo Reale, Venaria Reale and the Palazzo Madama. The second of these is sometimes dubbed the Versailles of Turin for its grandeur as hunting lodge’s go. The latter is now a great art gallery of antique and ancient art pieces, which is also famous for its majestic stairways. Many of these lie all on one square, the Piazza Castello. Here you will find the Piazzo Reale, the Palazzo Madama and the Armeria Reale.

Coming to Turin in winter, you may also be able to enjoy its uniquely beautiful Christmas illuminations, the Luci d’Artista. Every year, different artists create light installations all around the city, decorating its buildings and streets. This makes for a singular atmosphere as traditional Christmas lights are replaced in favor of such decorations that combine meaning into the illuminations.

Any trip to Turin should also include a visit to see the aforementioned Holy Shroud. The legend has it that the crucified Christ laid in this linen cloth, given that the body imprint on it resembles such a man. Science has, however, dated the cloth back to the 1300s, though the Catholic Church has neither accepted or refuted the relic as part of its faith. The chapel in which the shroud lies is part of a larger church, which is actually the city’s cathedral. La Cattedrale di San Giuseppe dates back to the 15th Century, though the chapel itself saw construction start in the 17th Century. 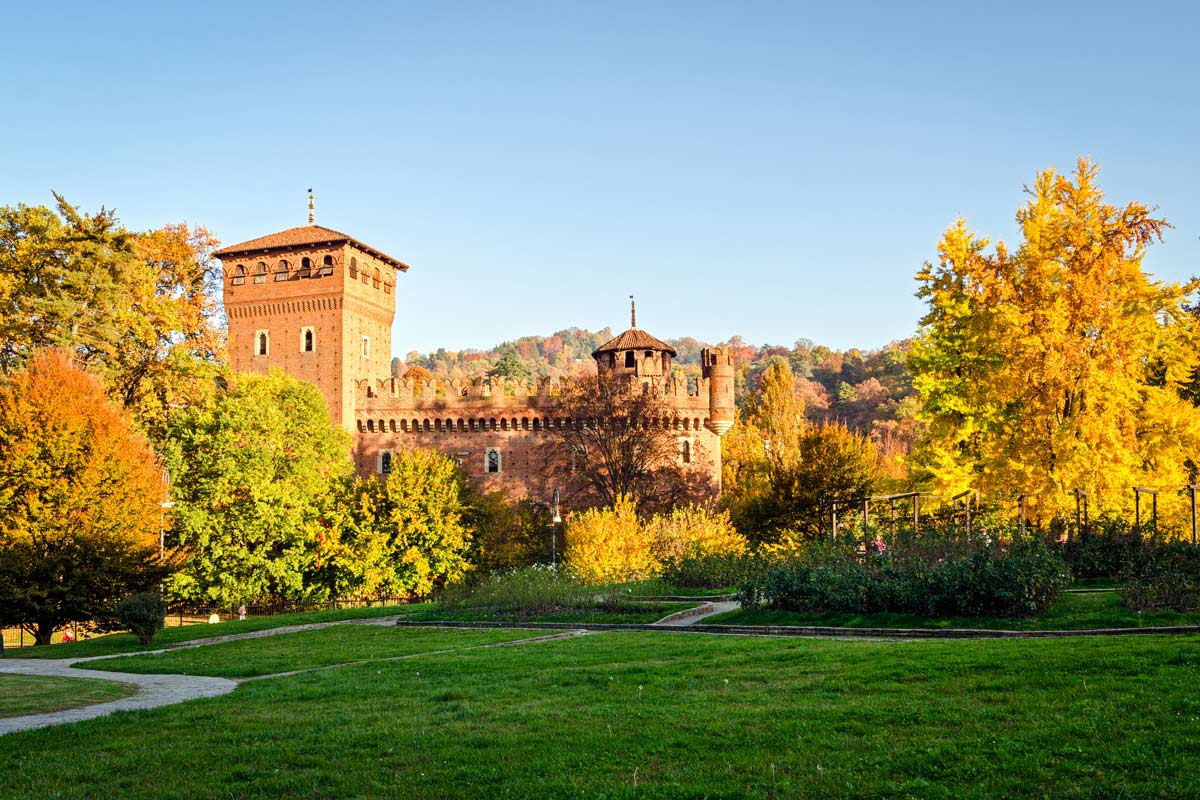 One of the great things about Turin is that is has plenty to do come rain or shine. In good weather, why not take a picnic to the beautiful Parco del Valentino. This is full of green lawns and ponds, as well as being home to the Borgo Medievale. This is a curious yet charming reconstruction of a 15th-century village. At the heart of the park you will moreover find the Castello del Valentino which dates back to the 1500s and is now the Architecture faculty of the Polytechnic University in Turin.

Alternatively, when it rains you can take refuge in one of the city’s many museums. The most famous of these lies within the curiously-shaped Mole Antonelliana. This building in Turin’s center features a bizarre, needle-like tower whose purpose is still unclear. Nevertheless, it is now one of the defining landmarks of Turin, adding to the city’s unique character.

Within you will find one of the world’ best museums on cinema, the Museo Nazionale del Cinema. Not many know this, but the cinema industry in Italy started in Turin. As such, this city has been seminal in the forming of cinematic history throughout the world. As part of this museum you will find Fellini’s sketches, Marilyn Monroe’s photos and the Magic Lantern. It also has many other artefacts and screenplays from throughout not just Italian but also world cinema. Even for those uninterested in cinematic history, the Mole Antonelliana has a great viewing platform. From here you can see over the whole of the city center.

Another museum you cannot miss is the Museo Egizio – the most important Egyptian museum outside of Cairo. The extensive collection here is mainly due to the great interest the House of Savoy had in Egypt. For a long time, the grandeur of a royal family could be qualified in the amount of Egyptian artefacts, especially mummies, that they had in their archeological collections. The Savoys were amongst the most avid collectors of such artefacts in Europe. Today you can view the same 30,000 items in the museum. This makes for a fascinating trip, if only for the incredible numbers of treasures on display!

At night, Turin has some great areas that become lively and atmospheric in the evenings. Some of the city’s nightlife centers include San Salvario, Piazza Vittorio and the Quadrilatero Romano. Many also head towards the Murazzi along the Po River. The latter is also nice during the day in the summer as you can sunbathe on its beaches before heading to one of its clubs. 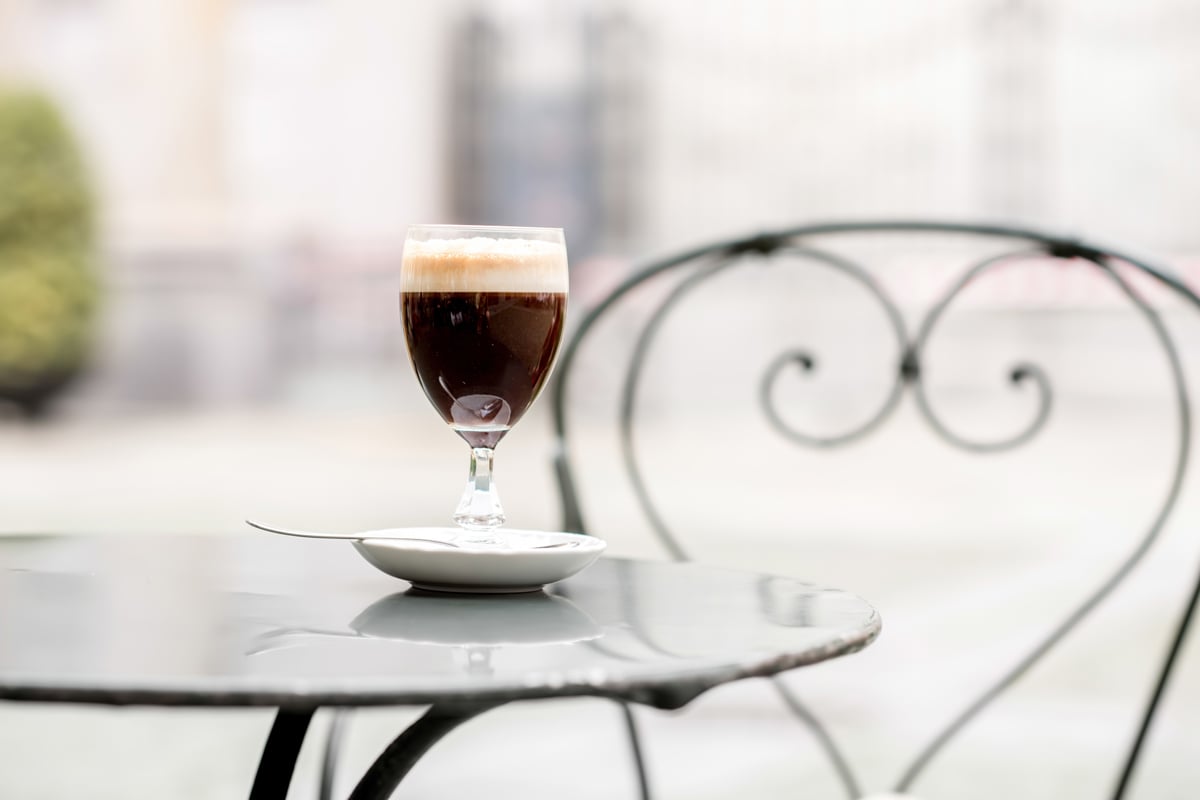 Turin is most famous for its chocolates and sweet treats. This is the birthplace of the gianduiotti, the small chocolates that you buy with caffè throughout Italy. Made with hazelnuts, these delicious chocolates are actually a product of an English embargo on cocoa that came about because of the Napoleonic wars. Today they are one of the most famous chocolates in Italy. The chocolate tradition continues in Turin’s traditional bicerin drink. Here coffee combines with chocolate and whipped cream to create a richly delicious drink. You can enjoy one such bicerin at one of the many historical cafés in the city.

Turin actually has the most cafés per person in Italy and takes particular pride in its traditional coffee shops. These were popular amongst some of Europe’s greatest thinkers and artists, including Nietzsche, Puccini, Dumas and Rossini. To top it all off, Turin holds an annual chocolate festival for 10 days across November and December. Other sweet treats are also on offer. For example, pastries such as diplomatico, bignoline and funghetto are little bitesized snacks with rum, cream, and chocolate respectively.

For those looking for something savory, don’t fret, for there are also plenty of meals that steer clear of sugar and chocolate! A classic meal of Turin is the bagna cauda. This consists of fresh vegetables served with a hot dip of olive oil, garlic and anchovies. Alternatively, you can opt for a fritto misto. This is not for the faint-hearted, however, containing liver, brain, bone marrow and even testicles of veal. A safer option would be the agnoletti del plin, small pasta parcels of meat and vegetables. There are many other traditional dishes to be had, and the majority of Turin’s understated yet refined restaurants will offer them.

Turin is moreover the place where the aperitivo was born. Now an Italian institution, this is also the ancestor of the Spanish tapas. At its most basic, an aperitivo consists of a slow drink (as dictated by Campari himself) with nibbles provided. These days this sometimes comes as an unlimited food buffet, which is a great way of enjoying an authentic yet cheap meal out!

Within Turin it is easy to get around on foot. This is also the best way to take in all the amazing buildings and palazzi in the city. As with many cities in Italy, Turin’s highlights sometimes hide in side streets. Here you’ll find your favorite bar, a quaint doorway or inner cortile. That said, this city also has an efficient and regular public transport system. This can be helpful for travelling across its districts. Another fun way to see the city is by bike, which you can hire upon arrival.

To get to Turin itself you can fly internationally to and from its Turin Sandro Pertini airport. There are also some international train lines; you can take trains to Turin from Barcelona and Paris. In addition to this, as the capital of Piedmont, Turin also has great train connections to the rest of the region and the rest of Italy.