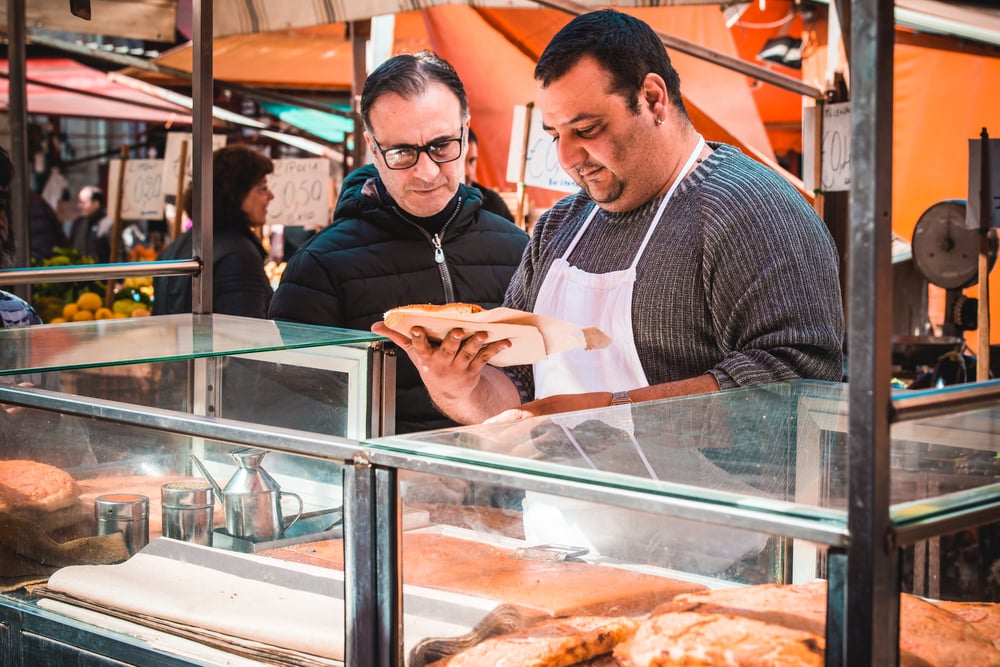 Although it has taken off as a trendy way to sample international cuisines in cities throughout the world, the concept of street food has quite modest roots, those of which have held fast in Sicily. The practice began with the Ancient Romans who were often too poor to afford ovens in their own homes, therefore flocking to the streets to find caloric food at a low price. This culture continues to flourish in Sicily due to its Mediterranean climate and life in the streets, making it an easy place to share classic bites with other locals.

You can find Sicily street food throughout the region, but the culture is concentrated in the two largest cities on the island, Catania and Palermo. They rival each other in food culture and in many other aspects, but most Italians will tell you that they are both worth a visit. Palermo, the capital city, is much larger and near the sea, with a variety of different neighborhoods and sites to see, while Catania is much smaller and more inland, but with a rich culinary history of gelato, granita and other classics like arancini. The rivalry between cities is evident in the different spellings of this famous rice ball (In Palermo the word is feminine, arancina, and in Catania the word is masculine arancino).

Arancini are in fact are some of the most well-known of the Sicily street food items, deep fried rice balls that are often as big as an orange (arancia means orange in Italian). There are many arguments that surround the name itself. The majority of Italians masculate the Sicilian delicacy by finalising the noun with an o, as in arancino. Sicilians however, believe the tasty treat to be a feminine noun, an arancina. The traditional style arancino/a comes in either a round or cone shape. The round shaped ones are filled with a ragu sauce with mozzarella and peas while the cone shaped ones are filled with butter or bechamel sauce with prosciutto and grated cheese. It is common to find many varieties of the arancini, including those stuffed with pistachios, or even the sweeter varieties oozing with chocolate.

A deep fried option along the street that can’t be ignored are panelle. The roots of this fried wonder go back to 9th century when the Arabs dominated Sicily. They liked experimenting with chickpeas in their cuisine, so they ground them into a flour which is then fried. These are often eaten together with potato croquettes called crocchè which are flavored with mint or parsley. Or it’s also quite common to eat them on a sesame bun as a sandwich known as pane e panelle.

Although some travelers might wince at the thought of eating animal intestines, many Sicilian locals wouldn’t think twice. Stigghiola, sheep or goat intestines, are a common street snack in Sicily. The intestines are roasted on a skewer and salted, sometimes laced with scallions. Another internal organ that is sometimes enjoyed is the spleen. Pani ca meusa, which means “bread with spleen” is a sandwich street vendors slap together, often adding salt and lemon. Even though these meat dishes are particular to Palermo, Catania has no shortage of hearty delicacies where they have their own version of Porchetta, different from the Roman variety, as well as offering more particular cuts of horse and donkey meat.

Another popular Sicily street food item is called Sfincione, a cross between focaccia and pizza that is uniquely Sicilian. This term can be translated as “thick sponge” reflecting the width of the crust, and it is topped with tomatoes, onions, anchovies and caciocavallo cheese, a sharp flavored aged cheese typical of the region. The person who produces this special food item has their own name, a “sfinciunaro.” He or she can be found selling sfincione in the street or at open air markets of Palermo.

As a result of its roots, street food generally encompasses savory, filling dishes to satisfy hunger at meal time. However that doesn’t mean that sweet items can’t be found along the street. In terms of these, classics like cannoli, and cassatta (a sponge cake soaked in liqueur, layered with ricotta cheese) can always be found. Another fantastic treat is the gelato brioche, a very specific kind of ice cream sandwich that locals indulge in at breakfast time or as a snack in the afternoon.

The best markets to find these delicacies which are usually cheap (somewhere from 1-3€) euros in Palermo include La Vucciria, Ballarò and Capo markets. In Catania the biggest markets are the Pescheria (fish market) and the market in Piazza Carlo Alberto.

EXPLORE OUR SICILIAN VILLAS FOR FOODIES