Ponza: A lesson in Carefree Living 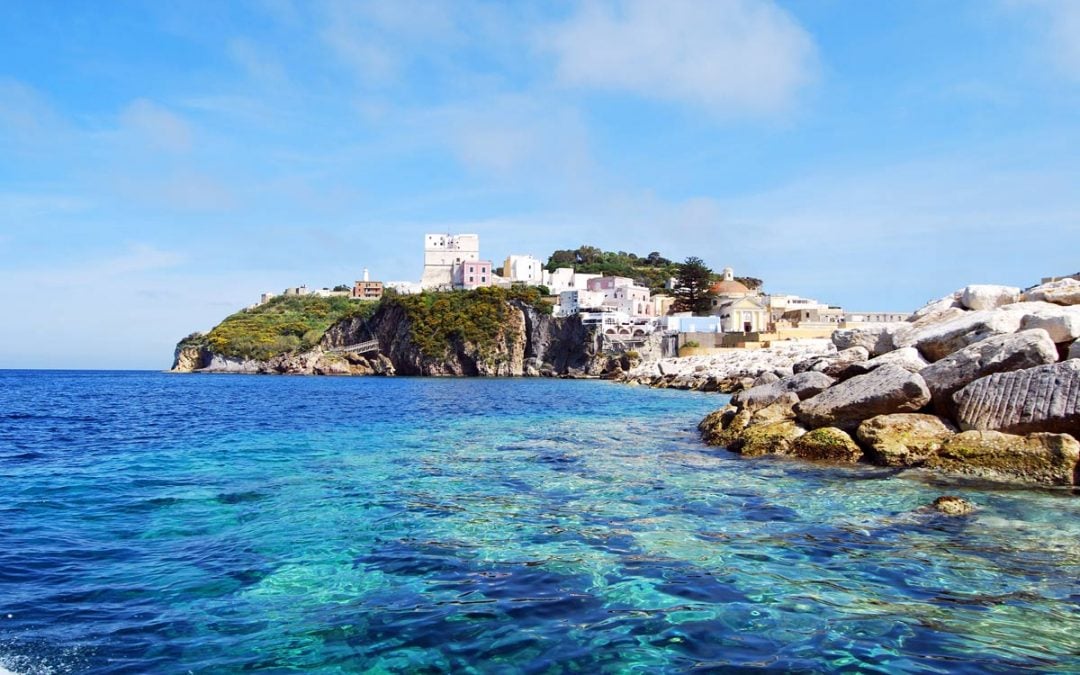 Ponza is a little-known island to the majority of foreign visitors to the Italian peninsula. That said, it seems to be a favorite amongst Romans looking for a summer getaway. Ponza lies in the capital’s region of Lazio. You can travel here from Naples, Terracina, Formia and Anzio. It is the largest of the Pontine Islands, which include Gazi, Zannone, Palmarola, Ventotene and Santo Stefano. Being the biggest, however, still only gives it two major settlements, at Ponza Porto and Le Forna at opposite ends of the island.

Ponza is popular amongst young people, though the nightlife is not the cheap club-strip variety. The common ritual consists of sipping an aperitivo or two over sunset before enjoying a late meal with friends and continuing such laid-back festivities late into the night. There are some clubs, however, they are out of the way and don’t disturb the otherwise relaxed environment.

“Guardians of the Simple Life, they exude a radiant insouciance”

In fact, this unhassled ambiance gives Ponza its charm. Both weather and people are warm and pleasant, in an unpresumptuous way. Replacing Capri’s glamorous villas for quaint pastel-colored houses, the elegance of the island is decidedly understated. Everything is well-groomed and kept, though always with that DIY touch that displays the pride of these otherwise isolated people. They may not have the facilities for everything to display a polished finish, but their character is unique, making for a homely feel. This stripped-back appeal draws in even international celebrities such as Mariah Carey and Bruce Springsteen. Nevertheless, nowhere will you find paparazzi lurking in the bushes as you might in Capri!

The shops and restaurants here are fuss-free, though very helpful. The food is predominantly seafood as half of the economy relies on fishing and the other on tourism. You won’t find many cars on the island. Instead, a few mopeds zip about the streets, and locals will often just wander down from their apartments to the shore. This is a haven of unaffected elegance, unmarred nature, and paradisal tranquility. Its inhabitants are guardians of The Simple Life; they exude of a radiant insouciance.

In the mornings, wander down past the pastel-colored houses, piling on top of each other down towards the port. Here you can take a boat tour around the island. Even better, hire your own boat and take it to one of the islands wind-protected bays. Drop the anchor and spend the rest of your afternoon dipping and diving into the crystal-clear waters. Bring some panini carprese, brindisi and wine with you as you laze away the afternoon. Head back towards the town before sunset, change and wander down to the beach front or frontone.  Here you can sip on a spritz or two before enjoying a meal. You can stay here as late as you please, as with cocktail bars and a lively atmosphere you might find it hard to pull yourself away! 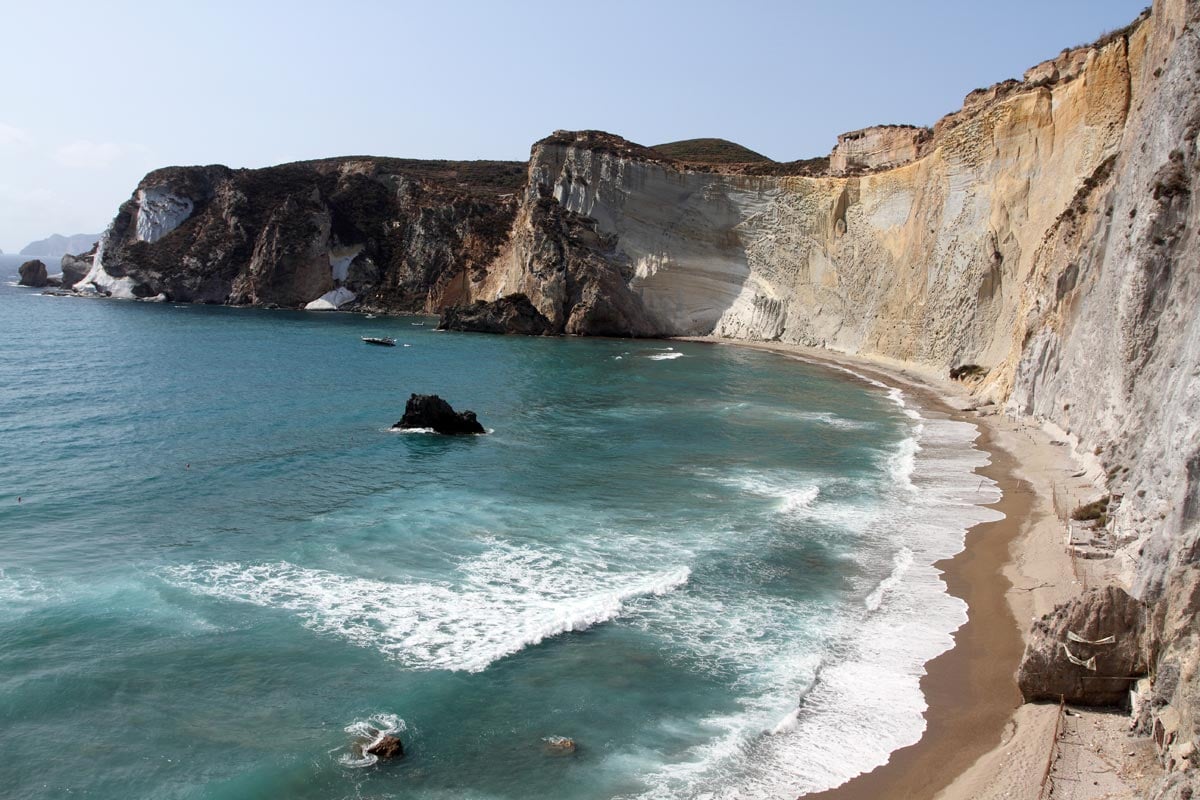 There is a great history hidden by the now gentle and quaint atmosphere that pervades the island. In ancient times the island went by the name Tyrrhenia, from which the name of the Tyrrhenian Sea also comes. The island actually connected to the mainland at this time via a thin land strip. This, along with much of the island’s land, sunk into the sea. Historians disputed theory until recently, when divers found a nearby harbor floor that had risen and sunk several times in the last 5000 years. The same floor also revealed some Ancient Roman temple remains.

With so many sunken treasures readily available, the area is also very popular amongst divers. Ruins aside, there are also many caves and reefs in Ponza’s waters. There are many grottoes on the island too, which are quite magical to visit. The Etruscans built the majority of these, such as the Grotta dei Serpenti.

Lying so close to Rome, the island became an exile hotspot of sorts during the Ancient era. This is where Caligula sent his elder brother to die. He also sent Agrippina the younger and Julia Livilla into exile here after discovering a plot to overthrow him. The latter had a villa built for her, the remains of which you can still see today in Villa Giulia. The former was to become the mother of Emperor Nero. Moving forward to the 20th Century, the island relived its previous role when Mussolini sent opponents of his regime to this island. He himself also spent some weeks here after his capture. In the Middle Ages, on the other hand, the islanders abandoned their home due to the overly-frequent sacks at the hands of Saracens, Turks, and pirates.

“Watch the golden sun paint the sky in a spectrum of copper, magenta, and violet”

The beaches of this island are often rocky, though you can find some sandy varieties in secluded coves. Once you have found your own cove, push your boat lease to the limit and watch the golden sun turn the water to rosé as its light paints the sky in a spectrum of copper, magenta and violet.  Somewhere to see but perhaps not linger is the Faraglioni di Lucia. These dangerous cliffs take their name from a 19-year-old girl. She took her own life after her family forbade her to marry the man she loved because he was a poor farm boy.

As you may be able to tell, the island thus has quite a tumultuous and tragic history, seeing prisoners, the exiled and suicidal lovers all grace its shores. Even in legend, many think this is the Aeaea of Homer’s Odyssey, where Circe lured Ulysses and turned all of his crew into animals. There are two grottoes that carry names to honor this story, the Grotta dell Maga Circe and the Grotta di Ulisse o del Sangue.

Today’s Ponza couldn’t be further from this rather violent past. People here truly live by the philosophy of a simple life. They have their friends, the sun, and the sea, and that is enough. There are very few cars, a few mopeds, and many people simply switching off in the tranquility of it all. Nothing is overdone, nothing is left to ruin – all that is left to do is to pick up a Panama hat on your way to the harbor, and let the simple nature of island life clear your mind of all clutter.