The Palio di Siena, The Most Spectacular & Dangerous Horse Race In The World

Unique in its shell shape, resplendent in its rosé colors, people do not hesitate to crowd to Siena’s Piazza del Campo. The marvelous medieval and Renaissance buildings provide the backdrop to the most spectacular and dangerous horse race in the world. The Palio di Siena consists of a competition between contrade in the form of an equestrian tournament of medieval origin where everything goes.

Like every year, the historical parade starts at the Duomo. More than 600 extras dress up in medieval clothes, and spin the huge flags of the local contrade, parading down from the cathedral. Then, the jockeys on horseback come out of the Municipal Palace. Each of them is the Captain of a contrada. Siena is home to 17 contrade: Aquila, Bruco, Chiocciola, Civetta, Drago, Giraffa, Istrice, Leocorno, Lupa, Nicchio, Oca, Onda, Pantera, Selva, Tartuca, Torre, Valdimontone. However, only 10, chosen in rotation, can compete.

Each contrada boasts a unique coat of arms and colors, and occupies a specific area of the city. Walking through the streets of Siena you can easily find out in which contrada you are. Simply observe the flags and coats of arms displayed along the streets. The inhabitants of Siena very much feel these territorial divisions. In fact, your birthplace usually decides which contrada you belong to, rather than your own preference.

Let’s go back to the Palio di Siena. It is almost night and the jockeys have received a horsewhip. This serves to incite the horse, and of course annoy the adversaries. The competition is ruthless, and every low shot accepted. The horses reach the “mossa”, the starting point of the race at the alley of the Costarella dei Barbieri. Here, the involved decide upon the starting order and the horses that will race. The chosen horses will enter the race “running”, i.e. already galloping. The jockeys talk to each other, trying to weave strategies and alliances. They want to ensure the best starting conditions for themselves, and the worst for the opponents.

The crowds eagerly follow the negotiations from the stunning, pointed arch windows of the surrounding buildings. You can also witness the race from the bleachers for a fee, or from the free places in the center of the square.

Finally a blast of mortar rumbling in the square marks the start of the world’s most reckless equestrian race. The jockeys ride “a pelo”, that is, without saddle. They speed over the serene stone ring that surrounds the square. This is covered in tuff dust just for the occasion. There are dangerous passages, such as the narrow curve of San Martino, where accidents and falls abound. This is why many are against the Palio di Siena. It is possible that either horse or rider will get injured during this race. The race takes place unobtrusively and without reserve of shady play. The winner will be the horse (with or without rider) who makes the first three laps of the square clockwise.

The contrada that wins will rush to pick up the stake (palio), a silk drape painted by a local artist (in the Palio of July) or an international artist (Palio of August). This is vertically supported by a white and black halberd. The palio will be first brought to the church and then stored in the Museum of the contrada. Here ceremonies will be celebrated with parties and dinners for weeks. 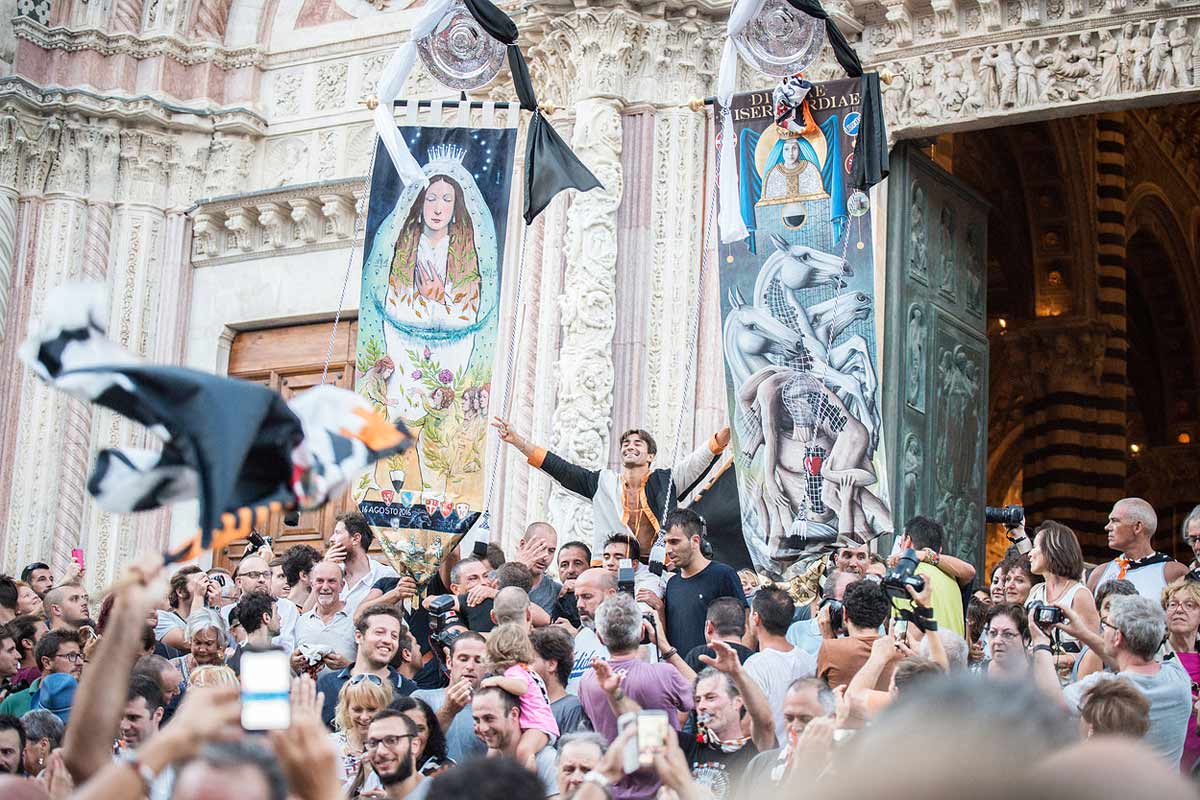 Like the Rio de Janeiro carnival, the Palio di Siena does not only attract tourists. Rather, it lasts all year long. The organization of the races continues seamlessly from summer to the next. Every year two races take place: on July 2 and August 16. The former runs in honor of the Madonna di Provenzano, while the latter runs in honor of the Assumption of the Virgin Mary. In addition, extra Palios take place for important events, for example at the turn of the New Millennium. Each Palio di Siena lasts four days, during which the city is in fibrillation. Everything begins in Piazza del Campo with the extraction by chance of the horses and their assignment to a contrada. Horses are in fact drawn out in order to ensure social justice in the race.

Jockeys take part in 6 trials in the square. This is to get to know their horse better. On the morning of the race, the “mass of the jockey” takes place, followed by the blessing of the horse. This happens in the Chapel next to the Municipal Palace. The horses probably need more luck than the jockeys, having to deal with a circuit that runs between medieval palaces and elbow bends. Not to mention the low strokes of rivals!

After the Palio di Siena, Piazza del Campo slowly resumes its normal rhythms. It is funny to think that this incredible square, which has held such furious races since 1200 BC, does not itself belong to any contrada. It belongs to the city of Siena and its very rich cultural heritage.

The Palio di Siena takes place twice a year: July 2 and August 16. There is no centralized ticketing. If you want to follow the race free of charge from within the Piazza del Campo, we suggest reaching the square at least around 4.30 pm (but to find a place in the front row you have to arrive early in the morning). Inside the square you can buy drinks to cool off, but you will not find public WCs. Bring water and a cap to protect yourself from the sun. Avoid bringing small children with you. You can enjoy the race from more comfortable stations, on the bleachers with fee, or in the houses overlooking the square.

Where To Eat In Siena During The Palio

Of course, during the Palio di Siena, the streets flood with visitors from far and wide. However, Siena offers a plethora of exquisite gastronomical options, many of which you can book ahead.

Tuscany is famous for its meat, and Siena does not disappoint in this department. In fact, here you can enjoy typical cuisines such as pici alla lepre (thick spaghetti in hare sauce) or sella di cinghiale (chianti-braised boar). You can find a  particularly delicious version of this at the Antica Osteria da Divo  (Via Franciosa). Other eateries boast mouthwatering Tuscan dishes, for example Osteria La Chiacchiera  (Costa di Sant’Antonio), which offers a traditional Sienese pork casserole, and Osteria Le Logge.

For those wishing to steer clear of the traditionally Tuscan bistecca alla fiorentina, there are many lighter options. Why not head to Tre Cristi (Vicolo di Provenzano) for a delightful seafood dish with a Tuscan twist? Vegetarians might find the typical Tuscan gastronomy perhaps less suited to them. However, places such as Osteria di Castelvecchio (Via Castelvecchio) ensure they always have a vegetarian main course option.