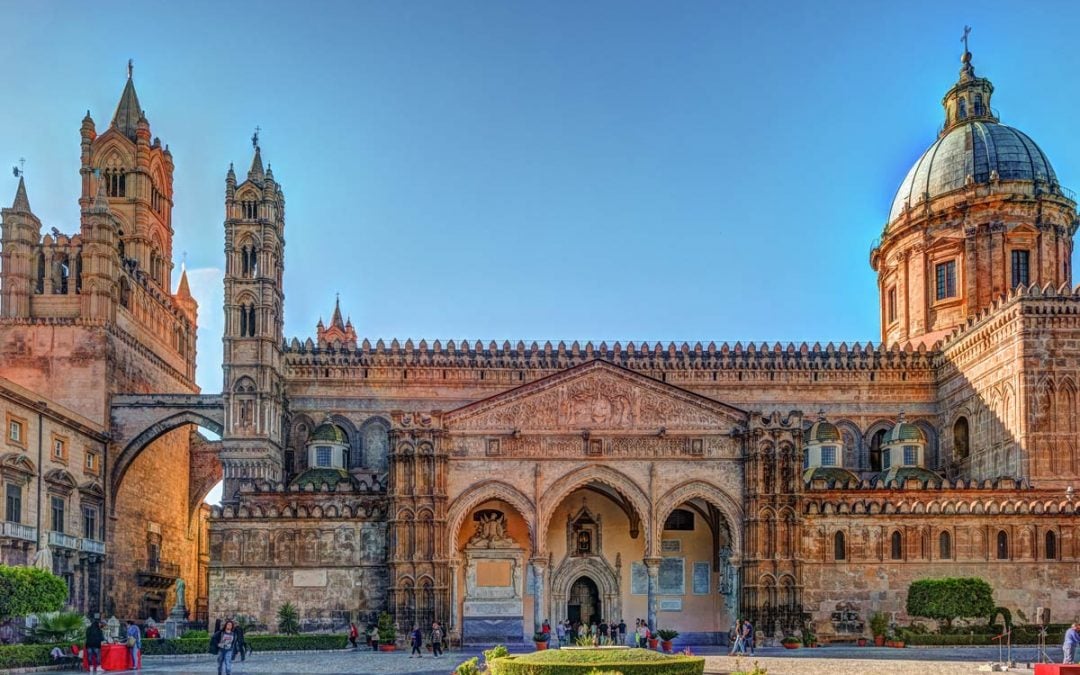 Palermo, like much of Italy’s most important cities, dates back many thousands of years. In fact, the area has had settlers for over 27,000 years. That said, it was the Phoenicians who were the first to officially found a city here in the 8th Century BC. They named it Ziz, their word for ‘flower’. The city subsequently passed through various rulers’ hands. The next 1000s of years saw the Carthaginians, Roman and Byzantine Empires rule over the area. By the mid-9th Century AD Palermo was under Arab rule, as was much of Sicily and Southern Italy. In Latin the city had been Panormus, in Greek Panormos and under Arabic rule it became Balarme. It is actually from the latter that today’s name came.

Palermo is the capital of Sicily, and lies in the northwestern corner of the island. In fact, it has been this area’s capital long before it was unified with the rest of Italy. After the Norman invasion in the late 11th Century, Palermo became not only the capital of the Kingdom of Sicily but as part of the Holy Roman Empire under Frederick II HRE. It then united with the Kingdom of Naples to form the Kingdom of two Sicilies and remained as such for centuries, until the Risorgimento and unification of 1860.

Inhabitants of Palermo go by palermitani or panormiti depending on Arab or Latin/Greek roots. In the local dialect you will hear the city’s name pronounced as Palermu. Just as many cling on to the very specific dialect of the area despite the spread of Standardized Italian, so all Palermo’s inhabitants are extremely proud of the incredible cultural importance of their city. Palermo is actually often referred to as the cultural capital of Italy.

Many initially dismiss the city for its apparent derelict or ruinous appearance of the city. Nevertheless, it is exactly in this state of undone beauty that Palermo’s charm lies. Amongst this rundown cityscape you will find remains of every part of Palermo’s history. Here you will discover architecture from every era, streets still in ruins from WWII, and street markets reminiscent of North African bazaars. Nothing escapes this city’s scope for cultural diversity, its electrifying atmosphere and its singularly delicious gastronomy.

Palermo’s inhabitants live in and around their city, but they moreover truly live the city itself. It is a moving, living being and its walls exude tales of its history, all blending in with its busy present. There is always something to do or see here, a new food joint to try or a hidden street to discover. This Palermo city guide only scratches the surface of what the city has to offer. Use it as a springboard from which to dive into this city and its bottomless wealth of culture. 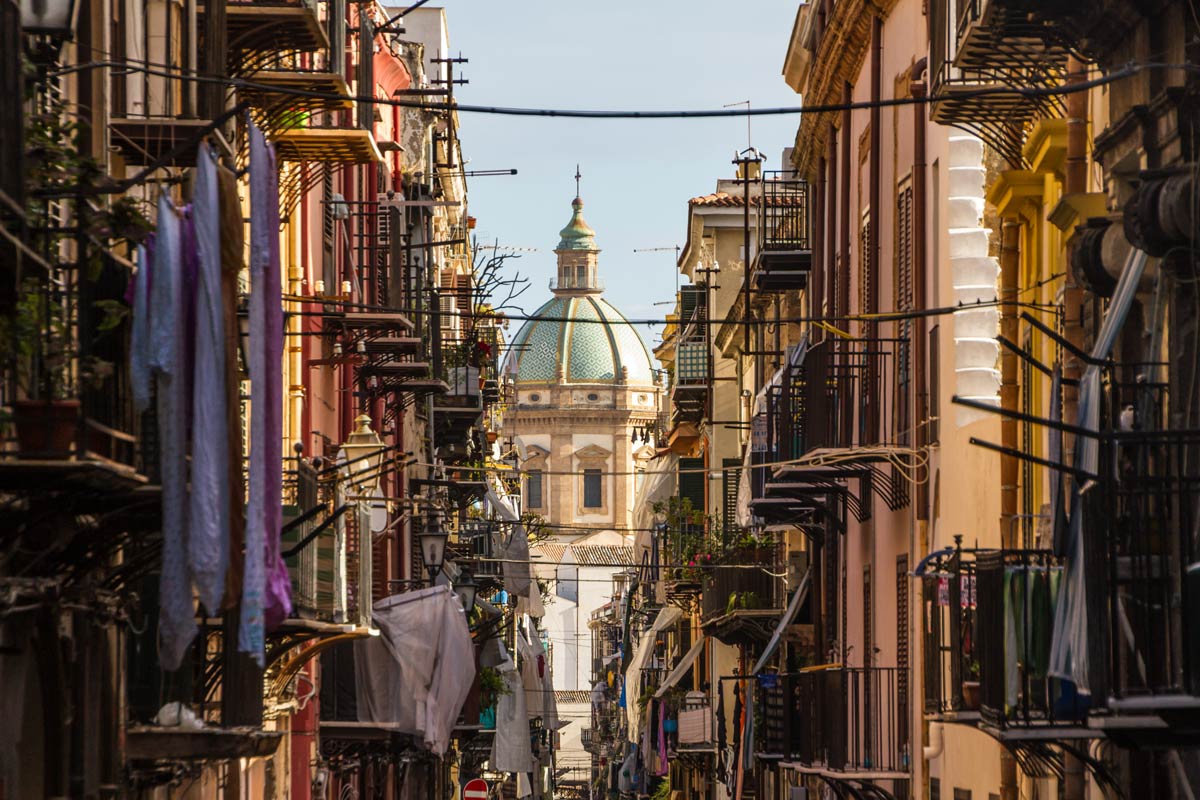 One of the greatest joys of Palermo is being able to aimlessly wander around its streets and unintentionally discover beautiful and enchanting sights as you go. Its buildings, for the most part, display Romanesque, Gothic and Baroque architecture, though their interiors often hold more secrets. A trip to Palermo cannot lack a visit to the stunning Palatine Chapel. Within this structure you will find the most exquisite Byzantine mosaics, with gold chips decorating its domes. Normans had a love of the Byzantine art and had artists travel all the way from what is now Istanbul to create these masterpiece.

Design experts Morgan Lovell tell us an even greater example of this exists in the Cathedral of Monreale. This lies just outside of Palermo but is easily reachable for a day excursion. In fact, many Norman buildings are a mix of cultures. with Romanesque, Byzantine and Arab influences. This sets the tone for all of Palermo. It is a true melting pot of different heritages, histories and cultures, it is perhaps one of Italy’s most diverse, though by far not most modern, cities.

Another delightful aspect of Palermo is the pride it takes in its botanical gardens. Visiting the Orto Botanico you can enjoy to 25 acres of botanical space that provides a beautiful and exotic atmosphere even in winter. You can find more green spaces in the Villa Giulia, a picturesque landscaped park, as well as the Giardino Inglese and Villa Bonanno. If nothing else, these are the perfect places to relax and take a break from a long day of strolling around the city, especially come the intense summer heat!

Even further away from the heat, you can descend underground to see the slightly harrowing sight of mummified 16th-century Capuchin monks and other locals. Many asked to be buried in the Capuchin Catacombs as a symbol of status and standing in the community. Those who were left behind would come to these crypts to pray for and to their loved ones. Today they are a slightly creepy but still extremely interesting attraction for visitors of Palermo. 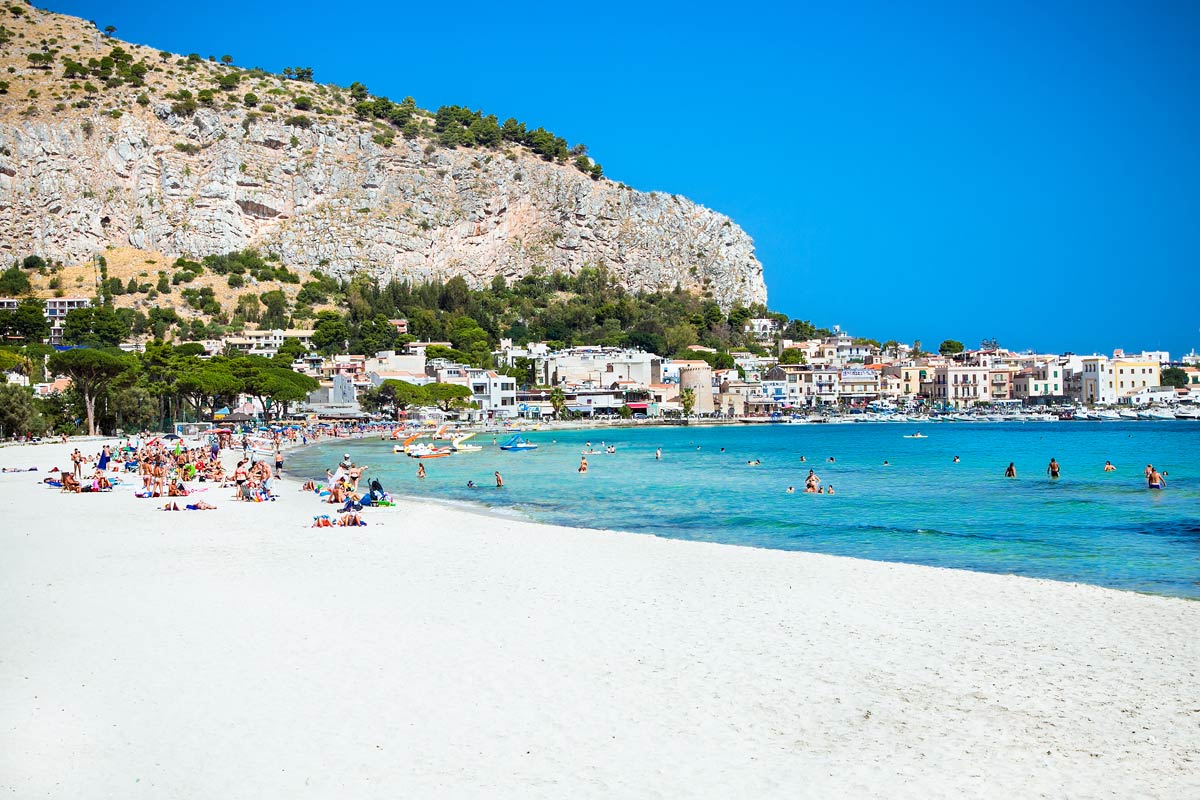 The first stop in any trip to Palermo has to be a stroll through the many street markets. Some of the best atmosphere’s you will ever experience can be found here. Locals shout at each other in their warm and lively dialect across market stalls, housewives will barter passionately but amicably with stall owners and the odd tourist will stand in the middle looking both slightly lost and enthralled in the busy and confusing hubbub. In fact, one of the markets, Vucciria, takes its name from the dialectal word for ‘chatter’ or ‘hubbub’. Here you will find cheap foods, vegetables, flowers, spices and even clothing.

For a break from the city life, you can also head to Palermo’s coastline for a day on the beach. The main and most popular of the accessible beaches is Mondello beach. It is closest to the city and also the largest of the area. For a slightly calmer affair, you can try the Arenella beach which is more tranquil and slightly less busy.

The nightlife in Palermo is really quite good. For bars, staying central is a good idea, with many bars and cafés populating the area around markets such as Vucciria. Many of these have their own unique décor, atmospheric and characteristic all at once. Head towards Alchimia for warm interior reminiscent of Palermo’s Arabic heritage. Alternatively, visit the Cambio Cavalli to experience one of Palermo’s oldest bars – think candlelit tables and a crowd that doesn’t mind taking a dance once the evening turns to night. For those looking for a dance, Krsaal Kalheesa is a unique club that takes up an atmospheric space under an old palazzo. Alternatively Gorky Club has a mainstream, crowd-pleasing music selection. Time your visit to Palermo right and you could even take part in the Ypsigrock festival in Palermo’s Castelnuovo.

If the city gets too claustrophobic, you can also easily take day trips to the many islands around this area of Sicily’s coast. You can, for example, take boat and ferry shuttles to Cefalù, Messina and Taormina very easily from Palermo. All of these are typical of islands in the area. They are home to a wildly beautiful nature, stunning sandy beaches and crystal-clear azure waters. It is best to visit these over a couple of days, but they can also be a great way to find a secluded beach for the day! 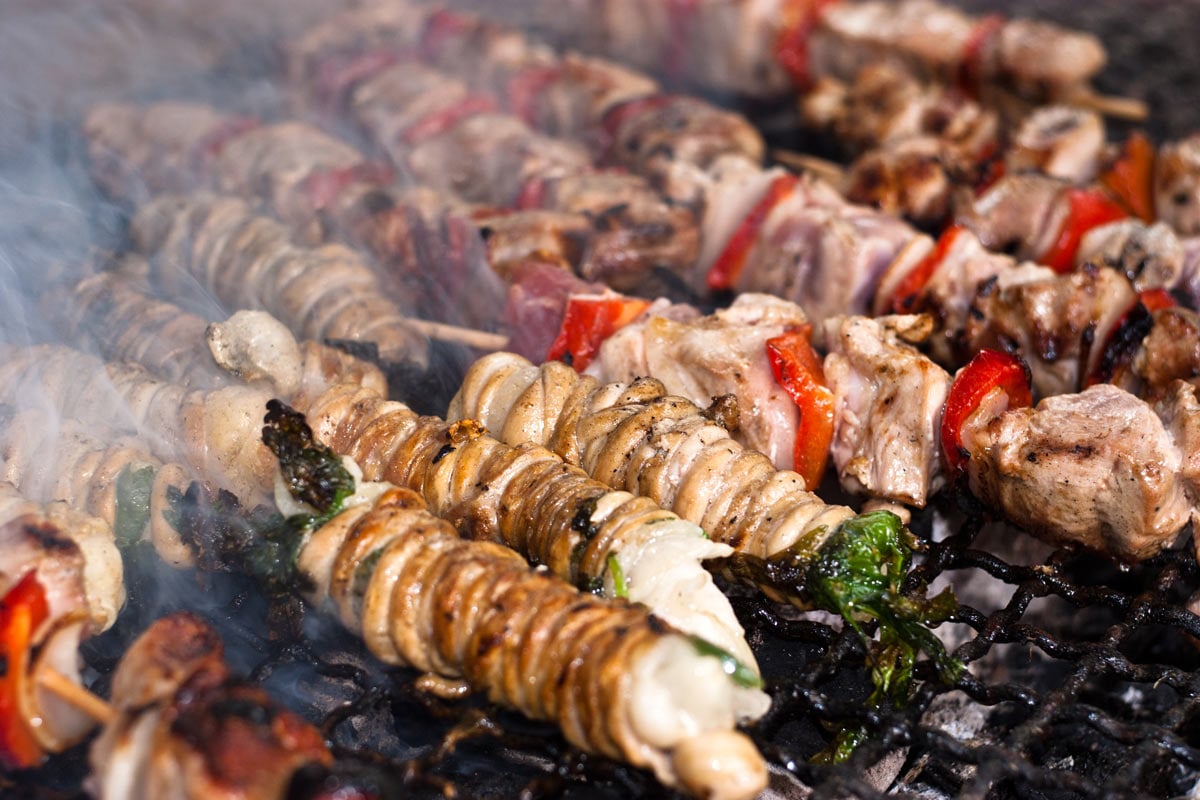 Sicily is famous for its mouth-watering cuisine. It is thus no surprise that its capital should have one of the greatest and widest selections of these delicious foods. The best of these treats can actually be found on the streets of the city. The street food of Palermo includes such delicacies as arancini, pezzi di rosticceria calzoni, pizzette, ravazzate and rollo’. The words may seem foreign even to native speakers of the language, but the ingredients will even more so. With foods including fried intestines, small snails still in their shells and other such meats, the textures and tastes are not always for the faint-hearted.

That said, many of Palermo’s dishes are suitable even for the most basic of palates. Arancini are deep-fried rice balls filled with ragù sauce, for example. Alternatively, pizzette are small, round pastries with pizza toppings. For those wanting venture futher into dangerous territory, why not try the pani ca’ meusa. This speciality can onyl be found in Palermo, and consists of a spleen burger! Alternatively, babbaluci, which consists of small snails cooked in oil, garlic, salt and pepper or with tomato sauce. You have to suck the snails out of their shell, but this is supposed to be particularly tasty!

For a sweet aftertaste, Sicilian and Palermitano dolci are sure to impress. Head to a pasticceria for the widest selection of sweet treats. A classic comes in the form of cannoli: crunch pastry-rolls filled with vanilla cream. In some places you can even find these with lemon, pistacchio or chocolate creams instead. Another Palermitano favorite is the frutta martorana, which takes the form of impressively realistic-looking miniature fruits made of marzipan. For a sit-down caffè you can also order a slice of cassata siciliana: a sponge cake soaked in liquor and stuck together with sweetened ricotta. The cake also has a covering of icing and almond paste. For something slightly more refreshing you can head towards a gelateria. However, once here don’t just order an ice cream, but go for the Sicilian granita. This is based on crushed ice and flavored with one of Sicily’s most famous tastes: lemons!

The best way to explore Palermo is on foot. The city center is small enough for this not to cause any problems. In fact,  if anything the city itself is the main attraction. Thus, the best way to soak it all in is by strolling through its streets. If staying on your feet is not an option, there are also bus tours that go around the city center and pass by the main sights at regular intervals. For a more traditional form of transport, you can even hire a horse and carriage for the hour!

Parking in the city center itself is not too easy, though many areas have some parking space available. The cost is only 1€/day, and you can buy tickets at tobacconisiti, bars o rshops. Piazza Ungheria and Via Ruggero Settimo both have dedicated car parks.

Palermo does also have its own airport, from which you can catch a shuttle bus or even train. Palermo, as the capital of the island, is extremely well connected to the rest of Sicily by train. It also has many sea connections to nearby cities and even mainland cities such as Naples.