The White Town of Ostuni 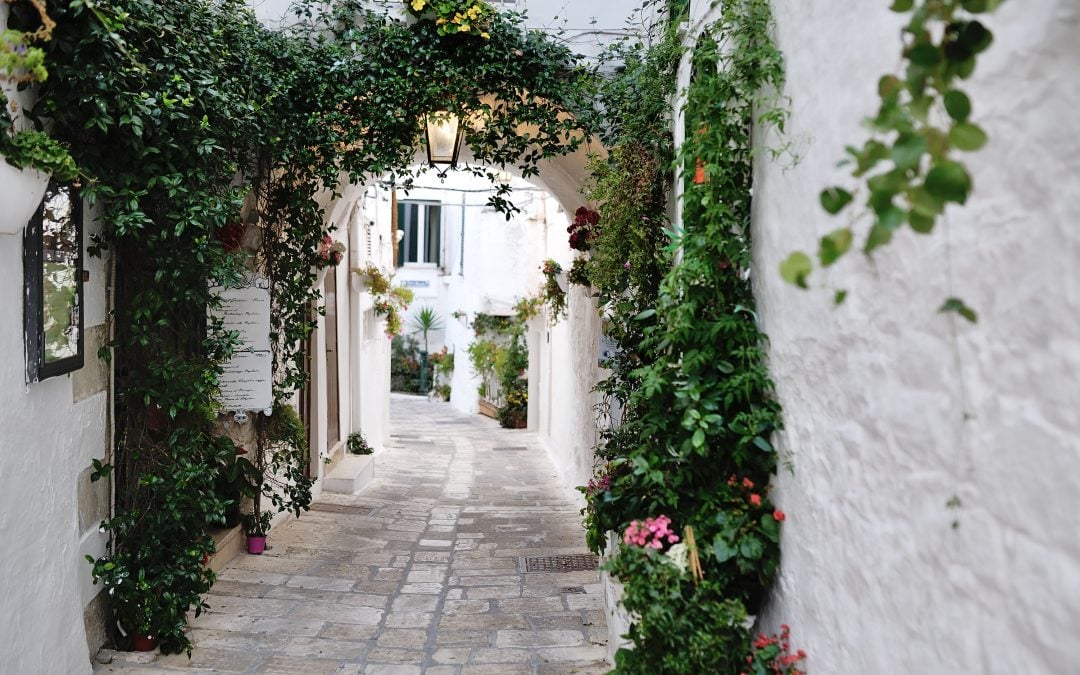 If you’re looking for a town that embodies the typical image of Puglia, the cobbled streets and bright, clean colours of Ostuni are a must-see. While (justifiably) many tourists head straight to the soft, white sand beaches that line the Adriatic and Ionian coastlines, we recommend turning inland to explore some of more underrated corners of Puglia’s interior. The medieval town of Ostuni grew organically over the years, and this is reflected in the seemingly haphazard tumble of buildings that make up its historic centre. Tiny crooked alleyways link quiet, sunny squares to yet more winding streets, and you will inevitably lose yourself as you explore. Historically this was a great advantage in a region often under attack from invading forces (Puglia has defended itself against the Greeks, the Goths and the Byzantines), as the town is a true labyrinth.

The area of Ostuni has hosted settlements since the Paleolithic period, when Neanderthal hunters made their homes in the various grottoes in the area. Evidence of these early settlers, in the form of a skeleton of a young woman discovered buried in a local cave, is on display in the church of San Vito Martire. Locally known as ‘Delia’, she is a fascinating example of Ostuni’s first inhabitants. During the peak of the Roman Empire, Ostuni was named and occupied by the Romans, before falling to the Goths and other tribes after the end of Roman reign. Its next notable invasion was in the 11th century. The Normans invaded and built a castle, which was later destroyed as the city was passed between various noble Italian families. 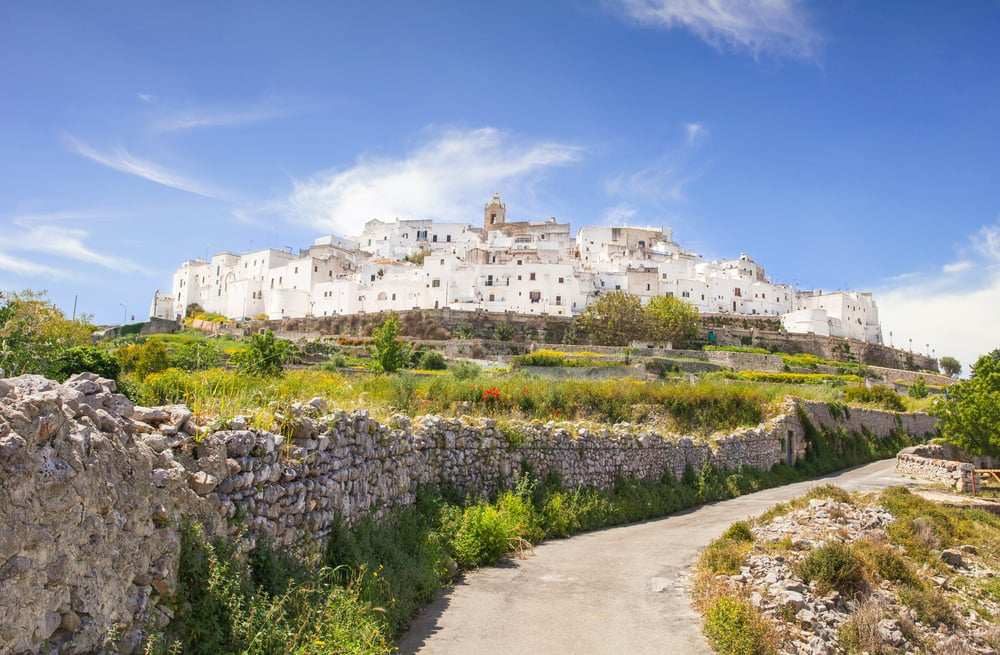 Today the town still bears witness to its many different past inhabitants, who have all left their mark architecturally, gastronomically and culturally. A gleaming pearl set in the sun-baked landscape, Ostuni’s whitewashed walls shimmer under the blinding Puglian sun. The streets of this hilltop town empty and quieten at midday, as the sun beats down on the cobblestones and locals retreat inside. That is, until aperitivo hour, when the squares fill with chatter and families take a turn about the main square in their traditional evening promenade. This is the perfect time to sit back with a gelato and become part of the background of this postcard-worthy scene. For a much-loved local favourite, try Cremeria alla Scala on Via Cap.Vito Tamborrino. The pistacchio di Bronte is mouth-watering, and is a perfect pairing with hazelnut or dark chocolate. 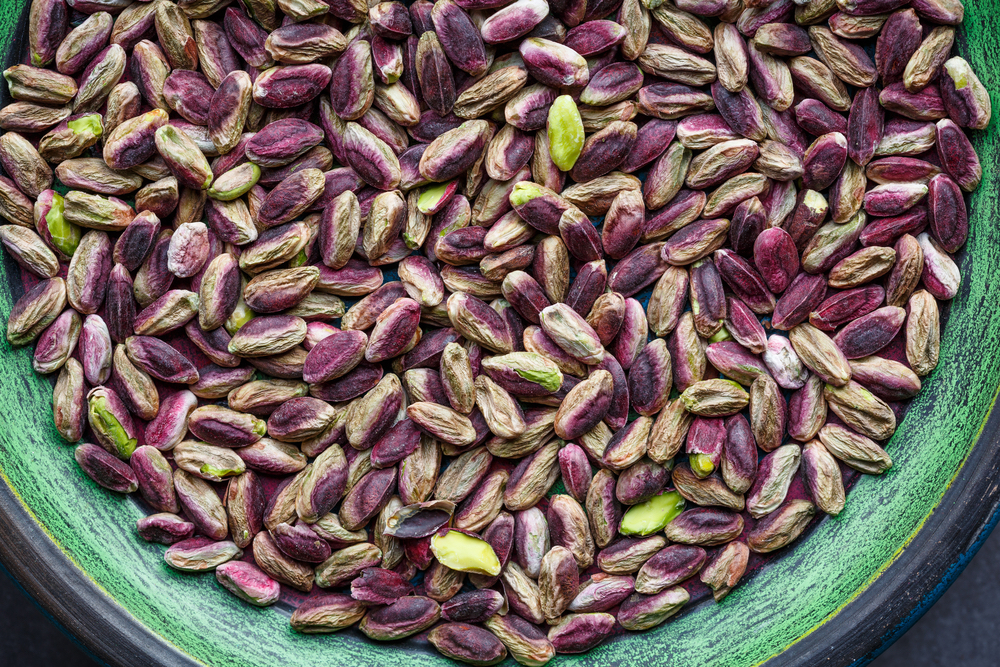 To start your exploration of Ostuni, climb Via Cattedrale from Piazza Sant’Oronzo up to the heart of the old town. The view from the town centre are breathtaking, stretching out over the surrounding countryside and all the way down to the Adriatic Sea. One of the architectural highlights of this lovely town according to Paul from SweepSmart is its Gothic cathedral, in creamy local stone that glows gently in the evening sun. Built in the 15th century, this little gem has a rose window worthy of Notre Dame, and its cool interiors make a welcome break from the sun outside. Other notable landmarks include the previously-mentioned baroque church of San Vito Martire (which is now a museum) and the Bishop’s Palace. To stay refreshed during a long, hot day of sightseeing, take a break on Piazza Libertà, Ostuni’s main square. Here you can sip a cocktail at Cicinedda Fruit Bistrot, accompanied by a tasty fruit platter or light brunch. 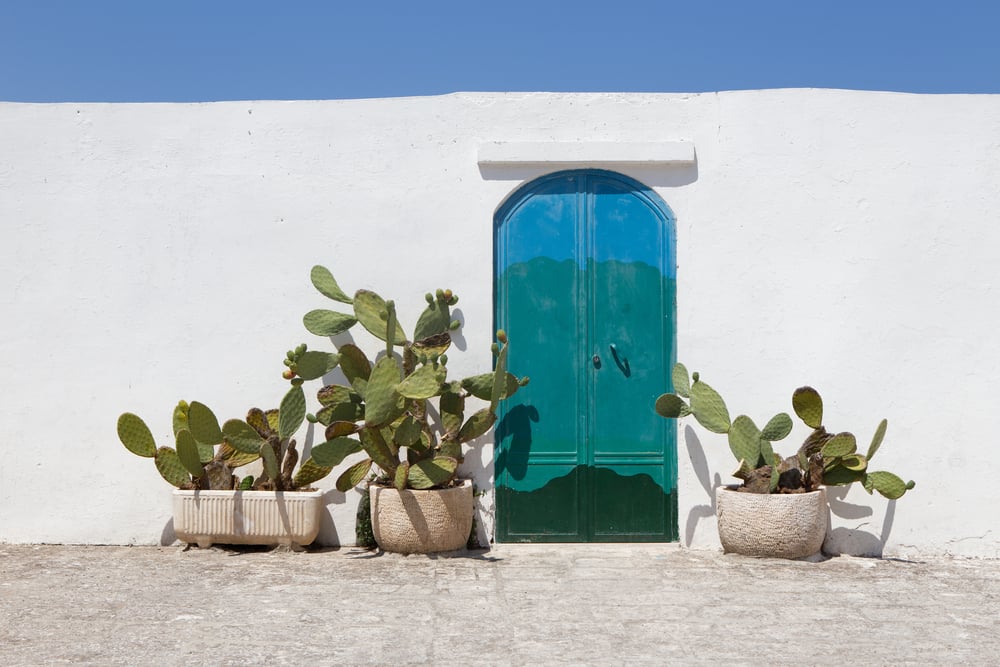 To continue your authentic Puglian experience, make the Saturday morning trip to Ostuni market. You’ll be rewarded for your early start with an amazing variety of local produce, from plump watermelon, fresh-caught octopus and swollen caciacavallo cheese to crisp, just-baked taralli biscuits flavoured with a hint of aniseed or chili. The prices are low, so fill your bags and head back home to make your very own southern Italian feast! Ostuni is close to the coast, at only 8 km, and is easily combined with a visit to the beautiful beaches of Torre Guaceto and Lido Morelli. There are two particular local festivals that visitors should consider taking in. Firstly, as the whole of Italy celebrates Ferragosto on the 15th of August, in Ostuni the Sagra dei Vecchi Tempi occupies the ancient town centre. It is a must for foodies, with some of the region’s best-loved traditional dishes on offer. In the last week of August, usually between the 24th – 27th, Ostuni celebrates its patron saint, Oronzo. On the final day of the celebration a fully-costumed procession takes places through the town on horseback. You are sure to find the ideal home away from home amongst our selection of Ostuni villas.