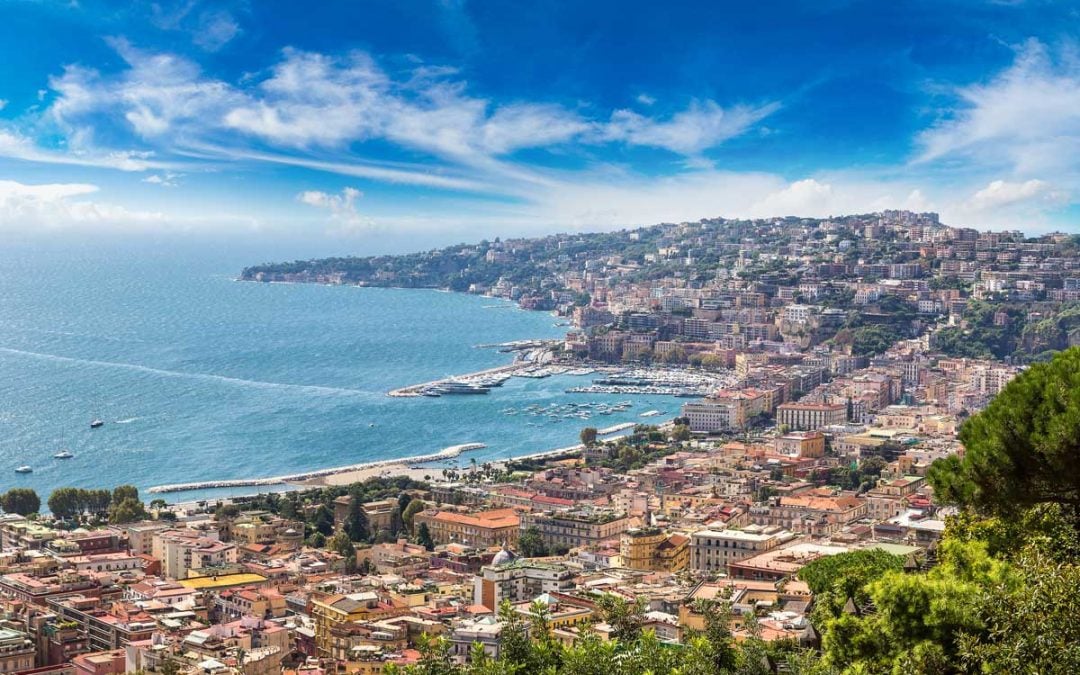 Naples is one of the many places in the south of Italy that still bare their Ancient Greek names. The first populations came here around the 2nd Millenium BC, though it wasn’t until the 6th Century BC that it started to bear the name Neapolis, or New City. The city has since kept its name, it only becoming slightly italianised in Napoli, or Naples in English. It has almost always been an important port in this part of the Mediterranean, and has as such seen many different rulers. The Romans conquered the city in 326 and it soon became a haven of pleasure wealthy families and even Emperors. And so, the Bella Campania region was born. Soon, the Napoli’s surrounding area became famous as one of the most beautiful areas in Italy, especially with the Amalfi Coast so nearby.

After the Romans, Germanic and Byzantine rulers came to the city. By 12th Century the Normans had arrived in Naples, after having captured much of Sicily and southern italy, too. This is how Naples came to become part of the Kingdom of Sicily. It thus gave way to Palermo as the most important port city, though it continued to be a prosperous area. The 13th Century saw Naples’ first university open, establishing Naples as a city of learning and culture, which it still is today. By the 17th Century, the city was the largest city in the whole of Europe, with around 300,000 inhabitants.

Unfortunately, a great economic depression at the end of the same century seemed to change Naples’ fortunes for the worse. Rebellion gave way to plague, until the city joined the second Kingdom of Sicily in the early 18th Century. Once again, Naples flourished, but disaster was just around the corner. The French revolution of the late 18th Century hit all of Europe and shook establishment to the core. In Naples this had a more direct consequence when French troops occupied it and created a republic. As we now come to expect, the city’s fortunes were about to change.

With the defeat of Napoleon, Naples rejoined the Kingdom of Sicily, and there continued to be a game of back and forth until the city joined a now unified Italy in 1860. Changing hands so often meant that long-term maintenance was often overlooked. This and the wars of the early 20th Century left the city in a state of ruin that continued to be ignored until the 1990s, when regeneration projects started to come into action.

Because of the steep decline from its glorious past as a capital of learning, culture and beauty to a place of near notoriety of its crime and ruinous state, Italians sometimes call Naples La Città Perduta, or ‘The Lost City’. That said, today Naples is much more of a welcoming city than you might think. Don’t be put off by rumours of Mafia or Camorra goings on, for Naples is actually a place of incredible character and singular beauty. It truly wears its colourful past on its sleeves, and is proud of it. There is no shying away from its at times murky history, but that is not to say that what you see to day is nothing short of breathtaking. What is more, this is a great place from which to visit other areas of Campania, be it the Pompeii ruins or the Amalfi Coast. 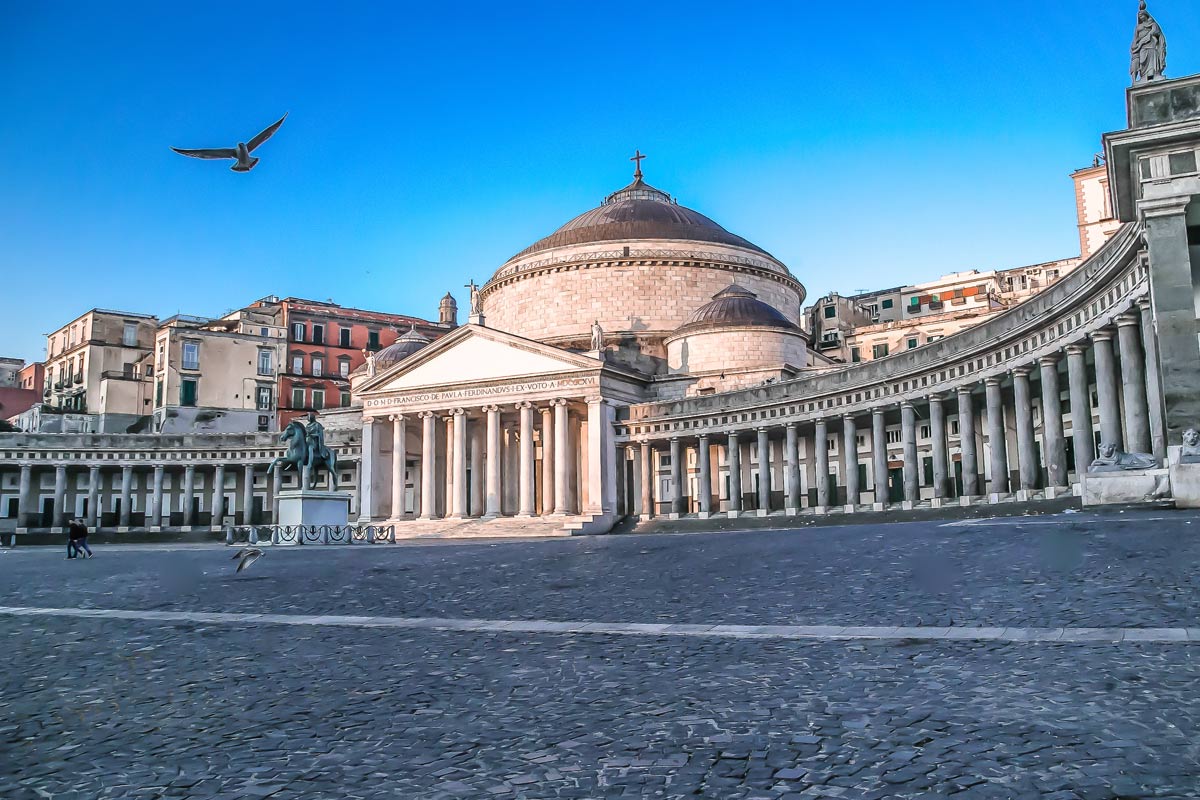 Walking around this city you will be absorbing one of the most unique characters and atmospheres in Italy. It is beautiful because of its complexity, and complex because of its history. Its streets are busy all through the day and long into the night, especially around its markets. Its buildings are often rundown, yet they exude a certain warmth that only a strong sense of community can create. The people are loud and passionate, so don’t mistake shouting for anger! In the evenings areas such as the university and the Spaccanapoli district come alive with an electric ambiance. Young people and old friends will gather over a drink or two in their favorite bar or restaurant before dancing and chatting the night away.

Coming to Naples around Christmas time, you can also take in the amazing festive markets. The Neapolitan Christmas is like no other, with a plethora of delicious treats and many a home-crafted gift on offer.

Naples also has its share of incredibly interesting museums. The most famous is probably the Museo Archeologico Nazionale. Here you will find all the treasures found at the nearby Pompeii and Herculaneum excavations. The Ancient Roman frescoes, sculptures and mosaics that once decorated these cities are all on display here. Perhaps even more poignantly, here you can find everyday items of the average household in Pompeii. This is a great place to visit before going to visit the excavations themselves, for a basic understanding of their history and importance to the area. Art lovers should definitely visit the Museo Capodimonte. This holds works by Caravaggio, Michelangelo, Raphael, Botticelli, Titian, Bellini and even a Warhol of the Volcano Vesuvius.

There is also some important and beautiful architecture to see in Naples. Heading towards the Piazza del Plebiscito you will, for example, find the Palazzo Reale. This baroque-style building is just one of many in the city’s streets, though some were destroyed during the world war bombardments. Churches are always an interesting detailing of architectural history. In this city, churches such as San Domenico maggiore and the Cappella Sansevero are the most popular. The latter in particular is worth a visit, with a great history hidden in its wall. This chapel is beautifully decorated and dates back to the late 16th Century, when the Duke of Torremaggiore commissioned it. It later served as a family burial site from the early 17th Century onwards. 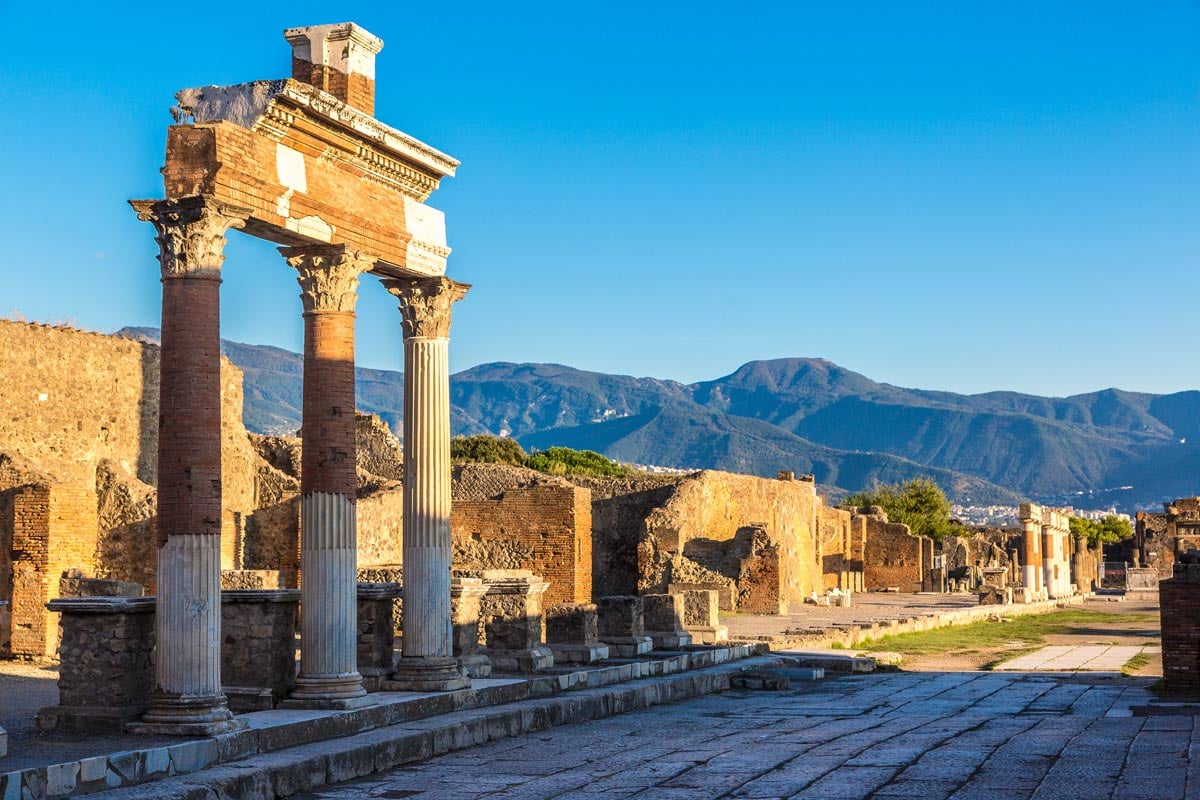 Being such a large city (it is now home to over 900,000) there is no shortage of activities on offer in Naples. For examples, there are three different castles you can visit as well as a whole underground city to explore. The latter of these is a truly unique and fascinating aspect of the Neapolitan cityscape. This sometimes goes by the San Gennaro Catacombs and consists of over 3000 burial sites. Along side these there are many frescoes and other pieces of art decorating the tunnels that weave underneath the modern city. You can enter these in the north of the city, and we would recommend taking a guide with you!

To explore the city itself and experience life here as a local, you could head towards a market. The Mercato di Porta Nolana is a great market where you can experience the indescribable buzz of a Neapolitan market. In the evening, take a passeggiata along the Lungomare, which is the seafront promenade. Here you can you can join locals on their evening ritual of chatting with friends as the sun sets over the bay of Naples. To discover something slightly more unlikely here in the city, you can visit the MADRE. This the modern and contemporary art museum of Naples. It holds many thought-provoking pieces, especially in contrast to the historic nature of the city itself.

To truly immerse yourself in this city, there is no better activity than attending a football match. The Neapolitans are as passionate about football as they are proud of their pizza. Failing to get tickets to a Napoli match, head to a bar showing the match and simply let the electric atmosphere wash over you! You can try and keep up with the Italian spoken here, but even those who have learnt it will find it tricky to understand all of the notoriously hard to understand Neapolitan dialect. Nevertheless, even blending into the background of such a bar is a great exercise in people watching!

Of course, whilst you are in Naples, you are in the perfect position to explore the surrounding area. Be it a trip to Positano on the Amalfi Coast, a day-trip to the ruins of Pompeii or a weekend stay on Capri or Ischia, there is something to please all types of traveler. The excavations are truly unmissable, and will allow you to delve into an exciting, Ancient and ultimately tragic history.

Capri is home to the rich and glamorous come summer, and for good reason. It is a truly stunning island with some of the most breathtaking views over the sea and its coastlines. Ischia is also an island, though is less glamorous and therefore slightly less busy in the summer months, though it is still very popular. The Amalfi Coast almost needs no introduction, being famous around the world for its undefinable beauty. Positano is a particularly enchanting little town on this coast line, nestling into the cliffs and displaying vibrantly-coloured houses. 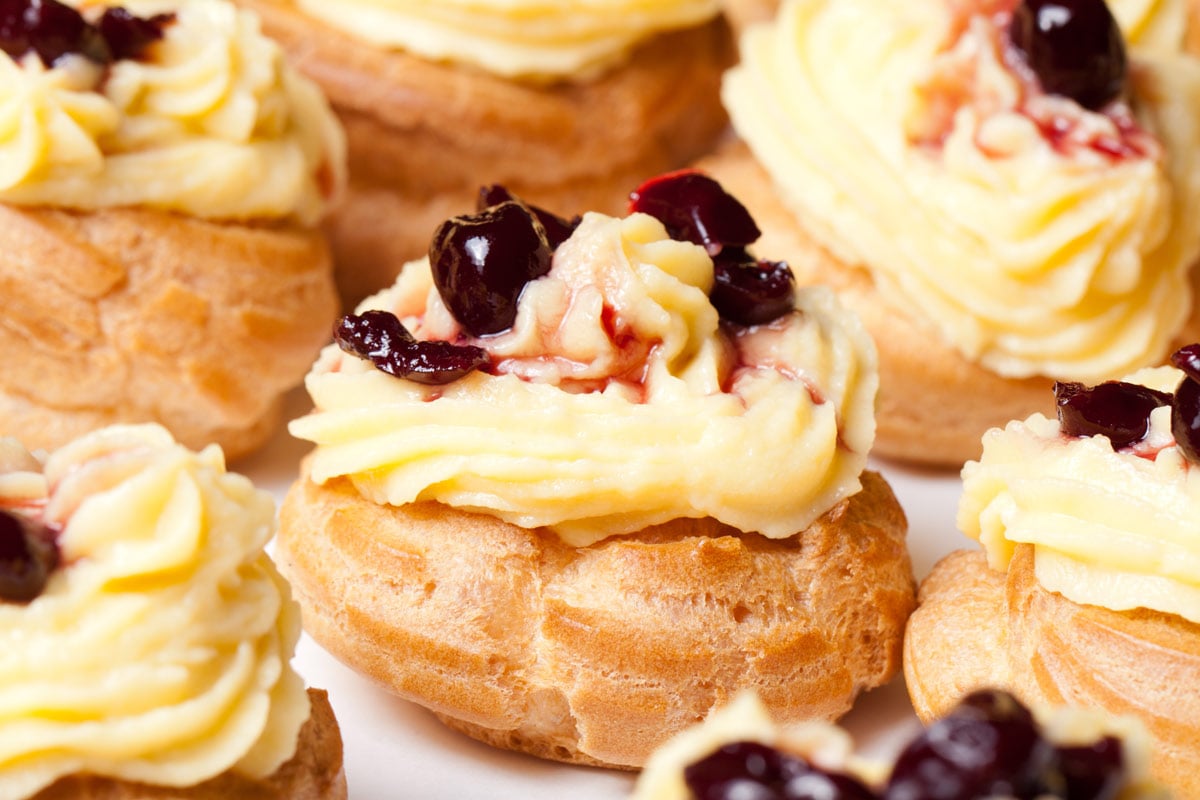 A huge advantage of having had so many different rulers is that Naples boasts a cuisine influenced by several different gastronomic traditions. Its bakery in particular still displays many influences from around Europe that evolved between the 1100-1800s. Whilst you are in the city, look out for delicacies such as baba, zeppola, sfogliatelle, and pastiera. These sweet treats are often pastry-based and include creams and honey.

Naples really comes into its own, however, in its savoury kitchen. In fact, this city is thought to be the birthplace of pizza. It is also home to what is widely acknowledged to be the best pizzeria in the world. The Antica Pizzeria Da Michele serves only two flavors of pizza but is an authentic taste of what this Italian speciality started out as. In markets and small take-out stores, you will also find the local specialities such as Frittatine. These are deep-friend pasta balls filled with mincemeat, béchamel, sauce and peas. Another classically Neapolitan food is the panino napoletano. This is a bread roll in which you will find ham, boiled egg, cheese and black pepper. Finally, in small forni or bakeries, you might find something the locals call montanara. These consist of deep-fried pizza dough with tomato sauce and a little parmesan or mozzarella.

In restaurants you will find a lot of seafood, given Naples’ proximity to the water. You can order a started or arancini, a cousin of Rome’s supplì which are deep-fried rice balls with ragù or mozzarella in their center.

The city is too big to completely traverse on foot, though it is possible to explore the main city center this way. The public transport system might not be the most reliable, but it is quite extensive. You can buy the one ticket that lets you on all public transport from bars and tobacconists. You usually pay by the hour, day, week, month or year. Make sure you validate your ticket on all types of transport, as this marks the start and end of its validity. Controllers will not hesitate to fine you should they catch you without a ticket or an unvalidated ticket! The ticket covers bus, tram, metro and funicular travel. That said, within the center it is often quicker to walk than take overground transport, as traffic can be extremely heavy in the city’s nucleus.

From Naples you will also have access to many connections throughout Italy and the Campania region. Favorite connections include trains to Pompeii and the Amalfi Coast and Sorrento. You can also take ferries and hydrofoils to the islands and more remote areas of the Amalfi Coast.