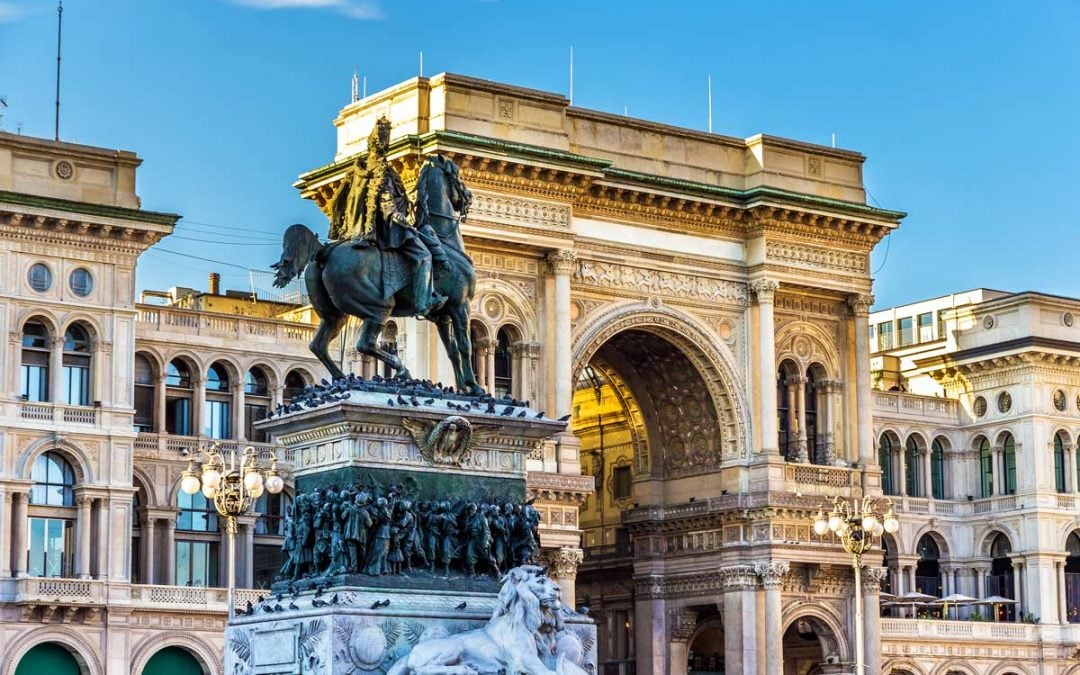 A fast paced city that is the heart of design, fashion and commerce in Italy, Milan is truly a forward thinking place. Milan tends to get the reputation as a city that you can skip on a tour through Italy. On the surface it may feel like a bustling metropolis with less friendly weather and people compared to its southern counterparts.  Although it doesn’t boast the same obvious beauty and sheer volume of historical sites like Rome or Florence, a closer look will reveal the people, institutions and ideas that are driving Italy’s modern edge and ambitions to compete in the world market. This Milan city guide can help you to discover the many layers of this city.

This city lies in the North of Italy, in the heart of the Lombardy region in the northwest section of the Po Valley. Milan is the second largest city in Italy (behind Rome).This northern city’s history dates back to the 7th century when the Celtics founded it. The city area is flat, with Lake Como, Lake Maggiore and Lake Lugano to the north, with the Alps and Apennine mountain ranges forming a natural border around the metropolis.

Milan serves as the financial and industrial hub of Italy. It is home to the Italian stock exchange and many insurance and banking headquarters. The city is also known as the fashion capital of the country. In fact, it hosts several international events including Milan fashion week and the Milan Furniture Fair.

Milan stands out with its modern skyline and sustainable architecture. That said, it also maintains a pride in its history, which is most prominently displayed in Piazza Duomo. 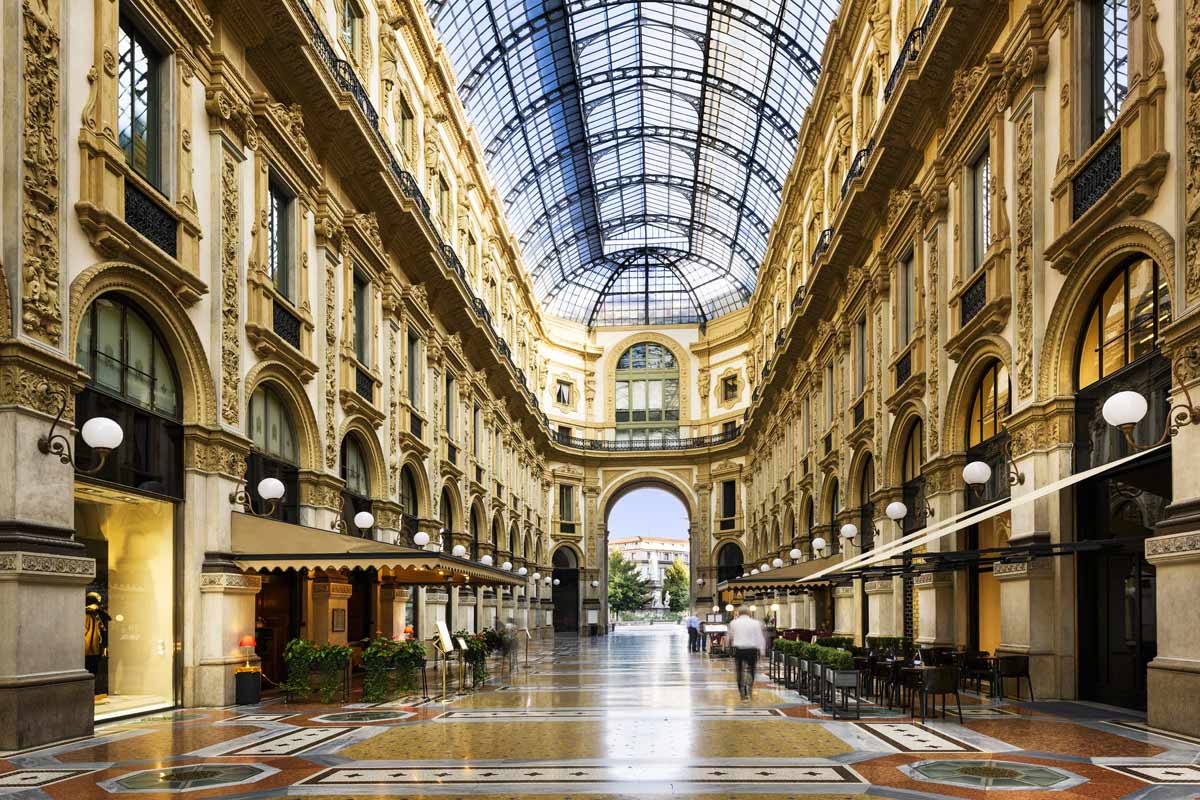 Some of Milan’s best secrets are not so easily discovered, so it takes a little walking around and exploration to see some of its most distinct and worthwhile areas.

However, an obvious stop is, of course, the Piazza Duomo. This elegant square is occupied by the enormous gothic cathedral made of white marble which took almost six centuries to complete. The structure is dedicated to Saint Mary of the Nativity and is the seat of the Archbishop of Milan. The structure is truly breathtaking and visitors can enter for free. There is also a small fee to visit the Treasury or Crypt inside or to go up onto the roof, a more popular choice among visitors.

Between the Duomo and the Scala Opera house lies the famous shopping arcade known informally as the Galleria. The iron and glass covered walkways house many high end shops, showcasing frontline fashion. Just a few of these include Prada, Louis Vuitton, Gucci, Versace and Dolce and Gabbana. These fancy walkways allow busy professionals to pass from one area of the city center to another. Of course, they also provide and create a moment of awe for visitors. In the octagonal center of the galleria, on the floor you will find a mosaic of a bull. Traditions says this brings good luck if you rotate your right heel three times in his testicular area.

An artsy and immaculately kept area of Milan where you can enjoy a cappuccino along the street or check out the upscale artisan shops that sell handcrafted items, this area is a must see. Brera is a bit of an escape from the commercial bustle of the city where the streets are smaller and the city’s aesthetics are more enchanting. This area is also home to Accademia di Belle Arti where one can view Milan’s famous painting collection inside the Pinacoteca.

Have an aperitivo near Arco della Pace

Along Corso Sempione you will find several restaurants and bars on either side of the street leading towards one of Milan’s main parks, Parco Sempione. Here, especially during nice weather you’ll find people dining outdoors at aperitivo time which generally ranges from about 19:00 – 21:00. Here you have a gorgeous view toward the park and the large triumphal arch that stands nearby. Having an aperitivo means paying for a cocktail which grants you access to a dinner buffet. Keep in mind, some buffets are better than others. We recommend Bhangrabar.

Go out in Navigli or Isola

Historically a system of canals and waterways, Navigli has evolved into lively rows of restaurants and bars, making up a significant part of Milan’s nightlife. A bit outside the center, you can reach it with the green metro line at the stop Porta Genova. Navigli is a great strolling spot, especially in the summer. Isola is another, lesser-known area for nightlife that can be found in the Northern area of the city. A former working class neighborhood, the area has recently begun to attract working professionals and artists as a result of its modern housing and chic aperitivo and nightlife options. 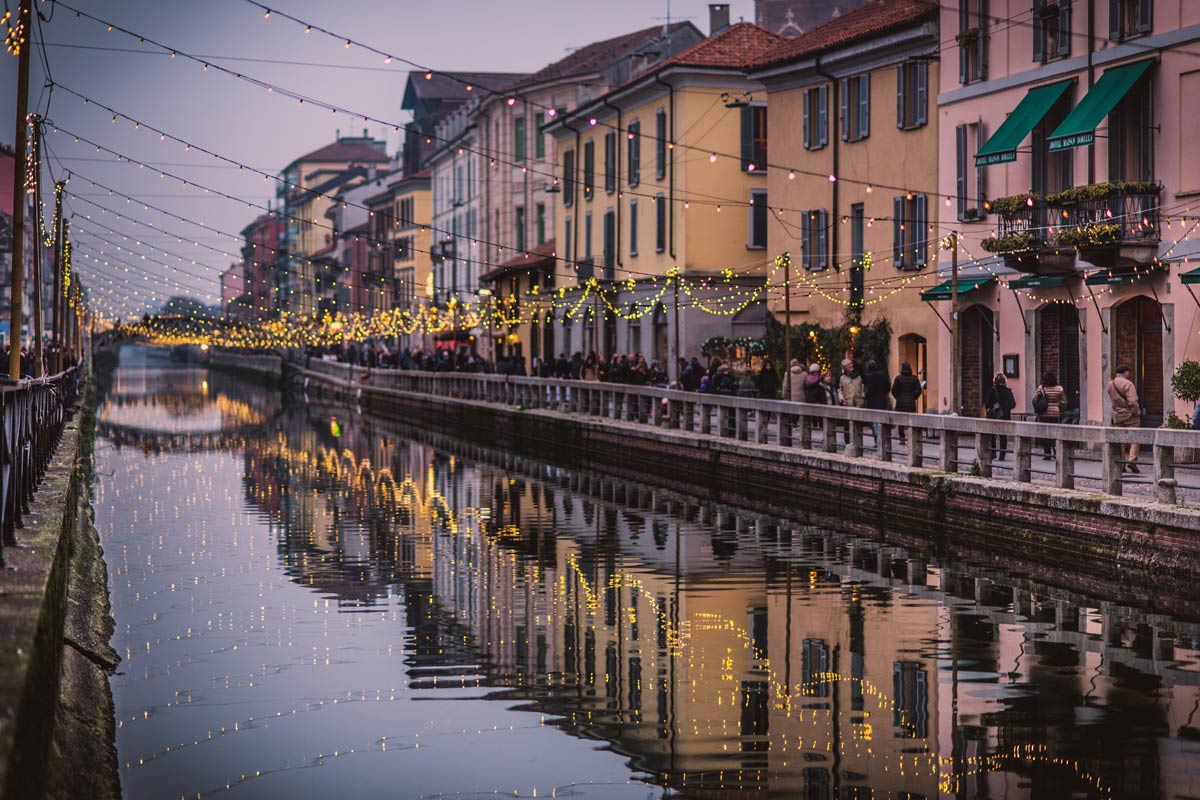 Milan is home to one of Leonardo Da Vinci’s most famous pieces, “The Last Super,” or “Il Cenacolo” in Italian. The renaissance artist painted this masterpiece in the late 15th century.This mural painting lies inside the convent of Santa Maria delle Grazie not far from the city center.  You must have a reservation as visitors are admitted to see this masterpiece in 15 minute shifts You can find these reservations through their site: weekendinitaly.com

Internationally renown for opera performances, Teatro alla Scala is a landmark for music lovers. Tickets to performances are notoriously expensive, but there are a few secrets for getting access to these world class performances for less. For example, the ScalAperta offers a select number of tickets one month in advance for a discounted price. Alternatively, Scala under 30 which offers discounts to viewers under the age of 30. Finally, the Children’s Performance cost 1 euro for the child and around 40 euros for the adult accompanying them.

This art gallery is the largest one in Milan with over 500 works from the 14th to the 20th century. You will find this alongside La Accademia di Belle Arti in Palazzo Brera. You can find masterpieces by Raphael, Bellini, Caravaggio, Mantegna and Piero della Francesca. There is also a small modern art collection by artists such as Modigliani, De Chirico and Carra. 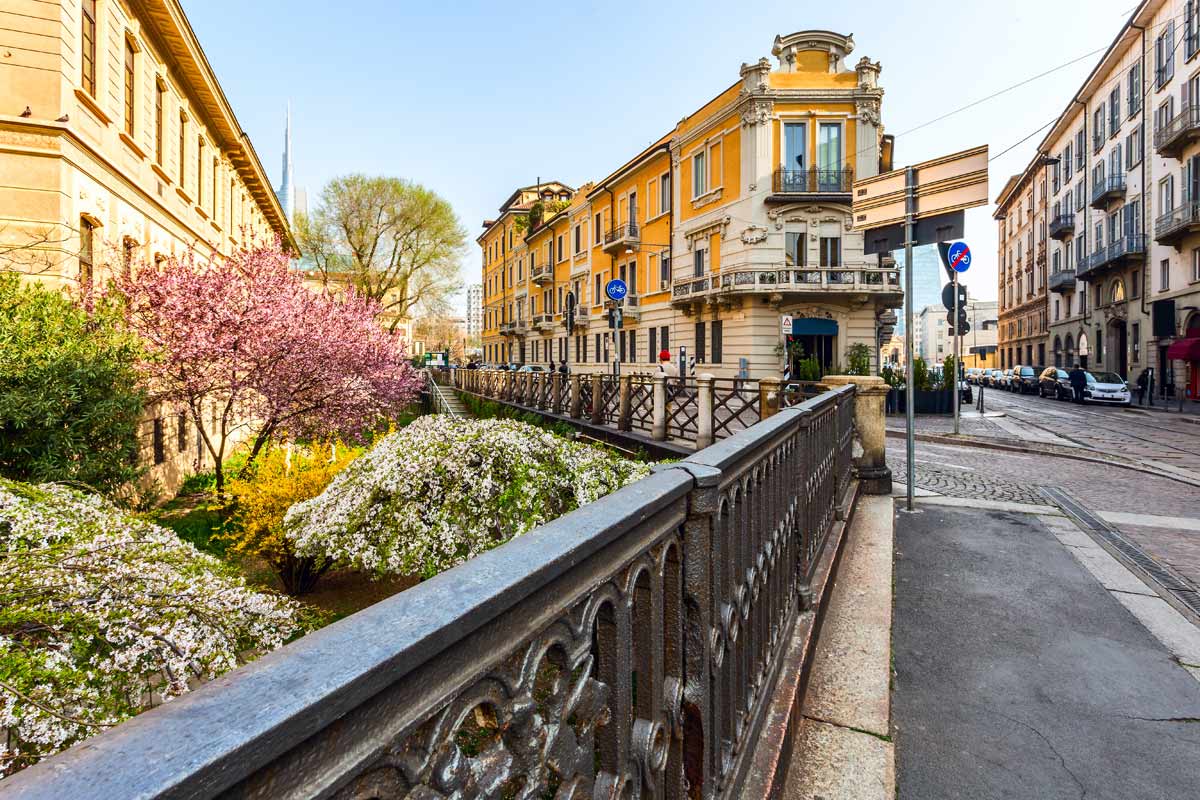 The Sant’Ambrogio Church is one of the largest churches in Milan, and sits in Piazza Sant’Ambrogio. It is one of the most important churches in Rome due to its history and Romanesque style. Christian martyrs were buried here after the Roman persecutions. It is notable for its medieval architecture with two bell towers and three naves inside that contain important artwork.

This large complex, a short walk from Piazza Duomo, is an impressive symbol of Milan and its history and a must see for visitors to the city. It has a defensive architecture and three of the protective walls still remain. It has undergone many reconstructions over the years and the present structure has three inner courtyards with several towers. The main entrance leads through the fortresses tallest tower. It is also home to a number of museums spread out over several floors.

This veal dish is one of the defining dishes of Milanese cuisine. The word cotoletta translates as veal breaded cutlet. In Milan this is pounded flat, covers the whole plate and is fried in clarified butter. It stands out from the Viennese Weiner Shnitzel in that it is cooked “bone-in.” The history of this dish is a little uncertain as some say it has Austrian roots, while others defend it as strictly Italian. In any case, restaurants throughout the city will serve this delectable meat dish. Damm-atra’s version in Navigli is a particular favorite!

Milan is located in the Po Valley where rice grows plentifully. This is part of the reason this risotto dish thrives here. Made with one of the worlds most expensive spices, this creamy, bright yellow colored rice dish is on offer throughout the city. Vegetarians be aware, however, as the true version uses bone marrow in its preparation. If you see the word “midollo,” on the menu, it’s probably the authentic version.

The Milanese traditionally eat this around Christmas but it find it throughout the year. This dome shaped cake made from flour, candied fruit, raisins and egg has modest roots.There are several legends surrounding its creation. The most popular begins with a cook who was preparing an aristocratic dinner but burned the cake. To improvise, he threw together a variety of ingredients left in the cupboards which lucky turned out to work together deliciously.

Arriving from the airport

There is really no need to take a taxi to and from the Milan airport as there are bus and train options that cost much less. The Malpensa express train leaves from the central station (Milano Centrale) and takes about one hour. The trains leave a few times per hour and cost 13 euros. It is also possible to take a bus (Malpensa shuttle) from the central station to Malpensa airport. The same goes for Milan Linate Airport and the other international airport of Milan

The public transport in Milan is notoriously efficient in comparison to other cities in Italy. You can purchase a single ride ticket for 1.50 euro, a 24 hour ticket for 4.50 euro or 10 rides for 13.80 euro.  There are bus and trams that connect visitors well with all areas of the center. Milan also has a metro system with 4 lines, the M1 (red), M2 (green), M3 (yellow) and the new M5 (purple). The metro opens at 6:00 and closes at about 00:30.