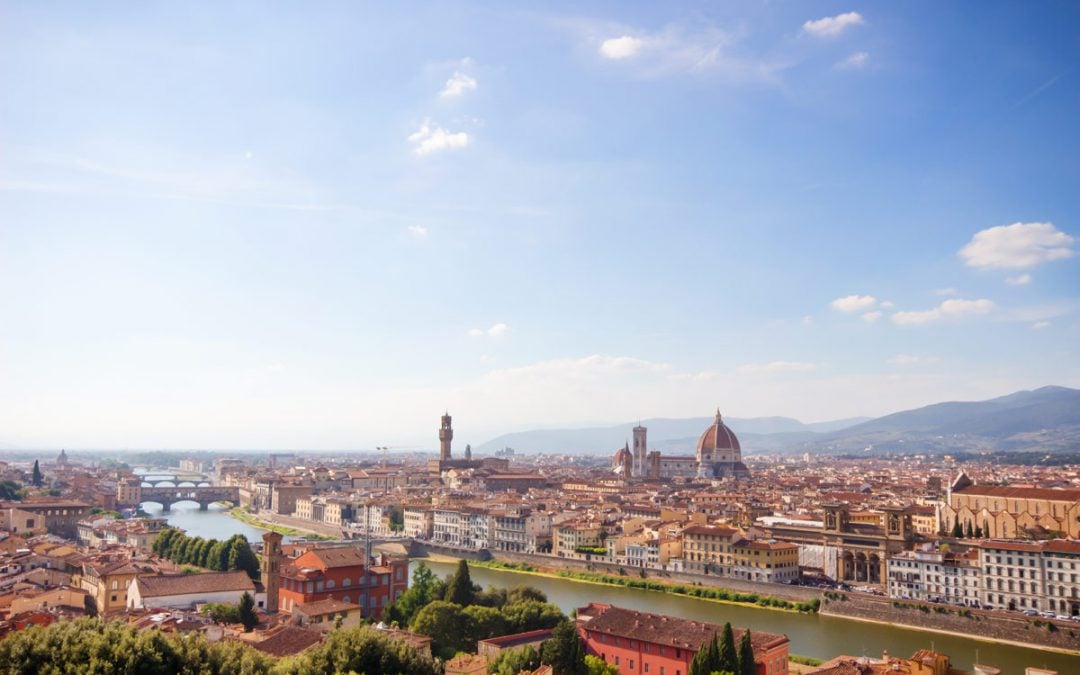 Florence is a place that is synonymous with beauty. This living city still breathes deeply with the life of the Renaissance. It has a rich collection of Renaissance art and architecture spread throughout.  It is a must visit for art lovers, being the home of some of the most famous pieces of artwork by Michelangelo, Botticelli, Da Vinci, Giotto, Brunelleschi and Donatello.  It’s also a romantic spot, with breathtaking piazzas and the the beautiful Ponte Vecchio leading towards the Oltrarno, south of the city. The area surrounding the city is also incredibly picturesque as the city sits in the foothills of Tuscany.

Small and compact, this city is bursting with sites to see. A walk through the medieval streets is enough to feel the city’s magnificence but a few days here is only enough to scratch the surface on all there is to see.  Visitors can admire historical churches among the famous piazzas. They can go back in time through works in the seemingly endless galleries and museums. Finally, there is of course, the food of the region. Visitors have the lucky opportunity to indulge in the notoriously delicious Tuscan cuisine which is known for changing with the season while being fresh and flavorful.

The city is also full of outdoor markets such as Mercato Centrale, San Lorenzo and Sant’Ambrosio. You can still find artisans producing shoes, handbags and other leather goods like they might have 100 years ago.

From an architectural point of view, Florence has a wide range of building styles which characterise the ages, from single-storey, low-slung buildings perfect for keeping cool in the summer to modern eye-catching designs made with cutting edge materials such as aluminium bi-folding doors.

Florence lies at the foot of several hills in the region of Tuscany. As the largest city in the region, it has around 370,000 inhabitants, who call themselves Florentines. It began as a Roman City and was established as the capital of Tuscany by the 3rd Century AD. Around the year 1000 A.D was when Florence began to come into power with its own currency called the ‘florin’. Following this many of the well known Renaissance artists came to Florence to create masterpieces. This was the beginning of the Renaissance. During the 15th and 16th centuries the Medici family strongly influenced the city. After the 1861 Tuscany was an official province of Italy.

This is decidedly a must see museum during one’s time in Florence. It is full of masterpieces, including The Spring as well as The Birth of Venus by Botticelli. There is also The Adoration of the Magi by Gentile da Fabriano, The Baptism and The Annunciation by Leonardo Da Vinci.  Other highlights are Venus of Urbino by Titian, and Medusa and The Sacrifice of Isaac by Caravaggio. Visitors to the gallery will likely face long lines if they do not book tickets in advance. We recommend booking them in advance on the official website.

Most visitors to Florence know the Academmia Gallery as the home of Michelangelo’s masterpiece sculpture, the David. This is the most visited work in the gallery. A line of other unfinished sculptures known as “the Slaves” lead visitors down a hall toward the David. Although this display is undoubtedly the most visited there are other noteworthy works to see by artists such as Botticelli and Ghirlandaio. Other highlights include the musical instrument museum and the Florentine Gothic Collection on the lower level.   Visitors to the Accademmia Gallery can also purchase tickets and/or arrange a guided tour in advance. 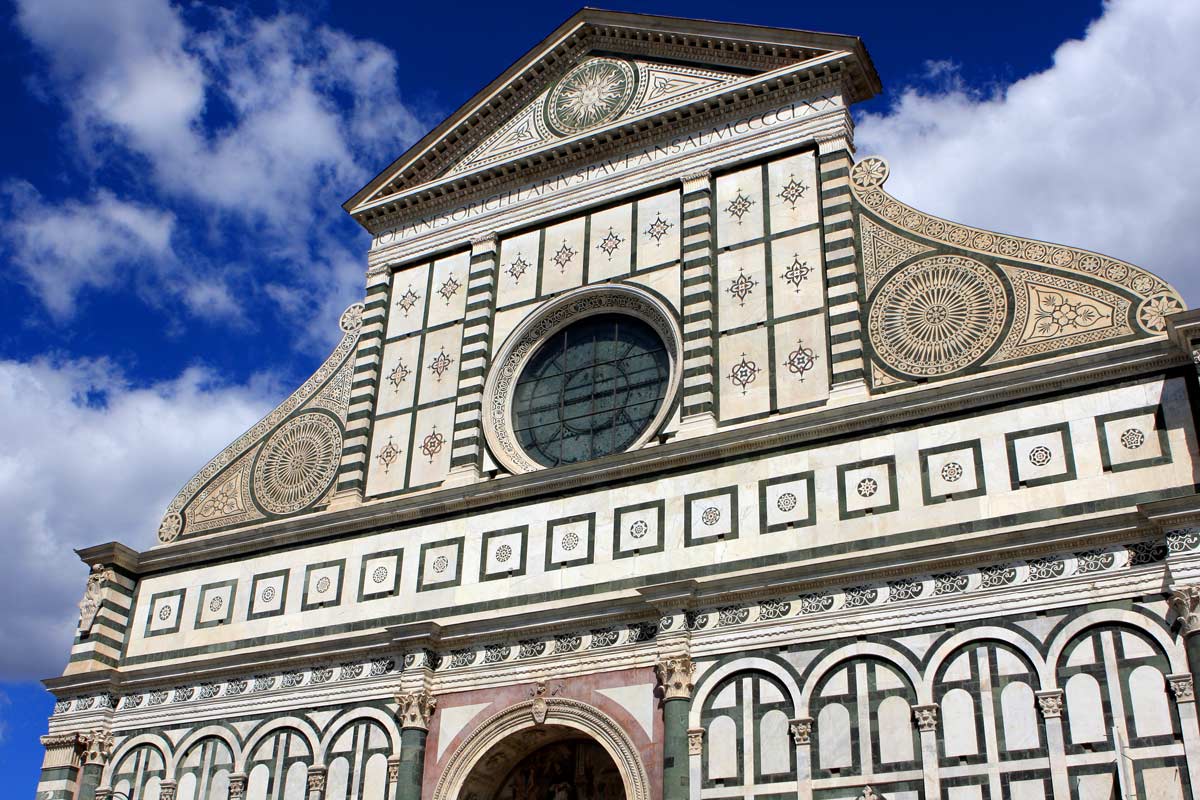 Filippo Brunelleschi engineered the dome or the “cuppola” of this grandiose church that dominates the Florentine cityscape.  The cathedral is called Santa Maria del Fiore, known more colloquially as the duomo. Arnolfo di Cambio designed the gothic cathedral and began work in 1296 but it took 150 years to finish. This historic structure sits in Piazza Duomo and includes the Baptistry and Giotto’s Campanile.

You will find this Franciscan Church in its eponymous piazza in Florence. Florentines consider this a precious symbol of their city as many important artists, writers, theologists, and politicians used it as a meeting point. Visitors can enjoy frescoes by Giotto inside the church in the right altar. They can also pay homage to Michelangelo, Ghiberti and Galileo as their tombs lie inside as well.

One of the striking aspects of this Renaissance church is that it is unfinished. Brunelleschi designed the structure in 1425 and although Michelangelo was to design the facade, it never came to fruition. Inside visitors can see the gilded monument dedicated to Donatello whose grave lies in the crypt of the church.

Similar to the Basilica Santa Croce this church sits in a piazza that shares its name very near the main train station of Florence. This gothic church doesn’t normally make the list of Florence’s top places to visit, but it is definitely worth a peek inside.  Here you will find Massacio’s fresco The Trinity, frescoes by Ghirlandaio, and the Crucifix of Giotto.

Fashionistas or those curious about the history of this iconic fashion brand can head to Piazza Signorina. Here they can see displays of bags, accessories and clothing items which were important to Gucci’s development and notoriety. The museum is three stories and the curators have arranged it by theme. There is also a cafe, bookshop and a library to satisfy the curiosity of all Gucci fans.

Salvatore Ferragamo was an Italian stylist who created an international brand of handmade footwear. He spent more than a decade in the USA and worked with many Hollywood stars in the 1920s. This museum, which sits in the basement of Palazzo Spini Feroni displays the history of Ferragamo’s shoe design, housing over 10,000 pairs of shoes which are displayed on a rotating basis. 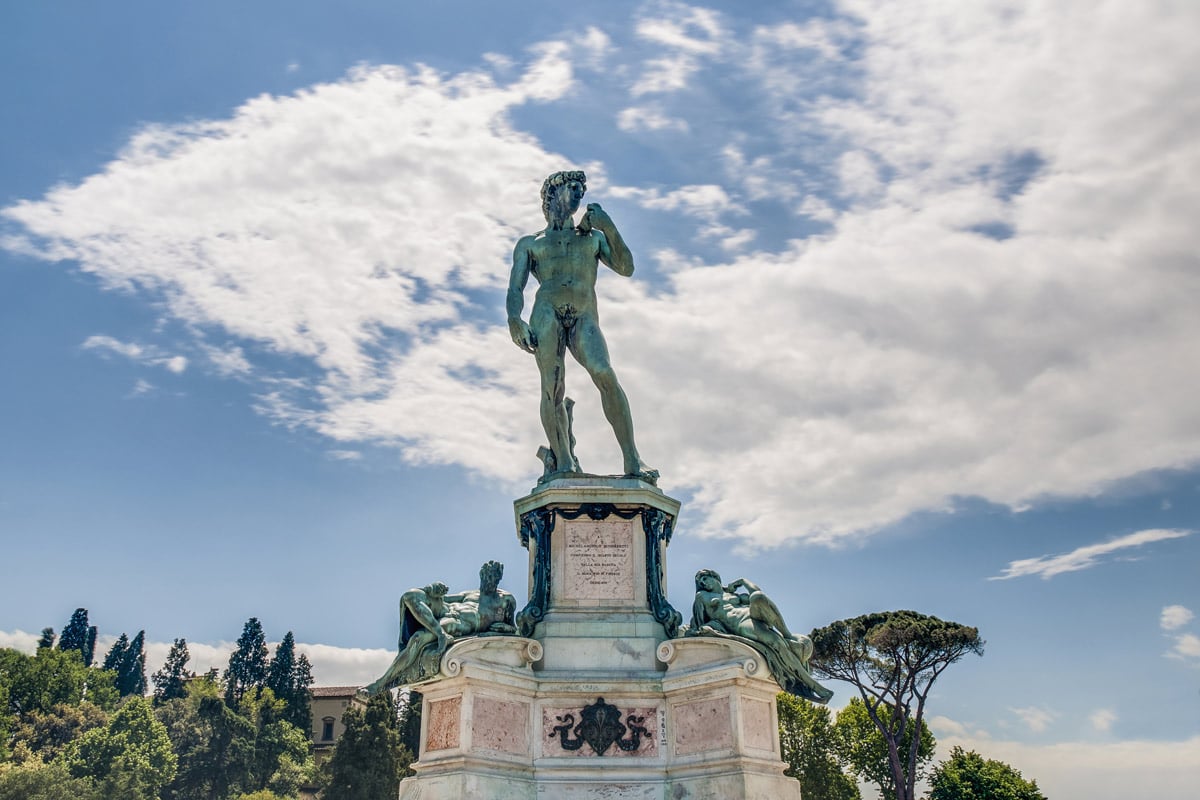 In the area beyond the Arno River visitors will reach the Oltrarno which means °beyond the Arno.” To reach this area, visitors can simply cross the famous Ponte Vecchio or one of the other bridges that lead across the river.  Tourists can observe this area south of the city that is historically home to Florentine artisans. Many shops still remain, selling handmade goods. It also has important sites to enjoy and includes the areas of Santo Spirito, San Frediano and San Niccolo.

If you want a fantastic look out point and a beautiful view of Florence’s cityscape, this is the place to go. A moderately strenuous climb uphill rewards viewers with a stunning view of the city. Once you reach Piazza Michelangelo it is even possible to climb a little higher to the the monastery of San Miniato al Monte with typical Romanesque architecture.

Florence is a great place to shop out in the open, as it is full of outdoor markets selling high quality goods. One of the most well known is Mercato San Lorenzo which has two parts, one with food, the other without. Both sections sell a plethora of items. It is open from Tuesday to Saturday. Another spot to check out which attracts more locals than tourists is Mercato Santo Spirito, open on the second Sunday of each month. For another local market open on a daily basis (besides Sundays) look for Mercato Sant’Ambrogio which sells anything from clothing to household items.

You can find the Boboli Gardens in the area of the Oltrarno, behind the Pitti Palace. This area provides a tranquil escape from the city being one of the largest green areas in Florence. The area feels almost like a monumental park complete with sculptures, fountains and even a grotto. The area sits a bit higher than the Pitti palace so visitors can walk uphill to turn enjoy a view of the city center. 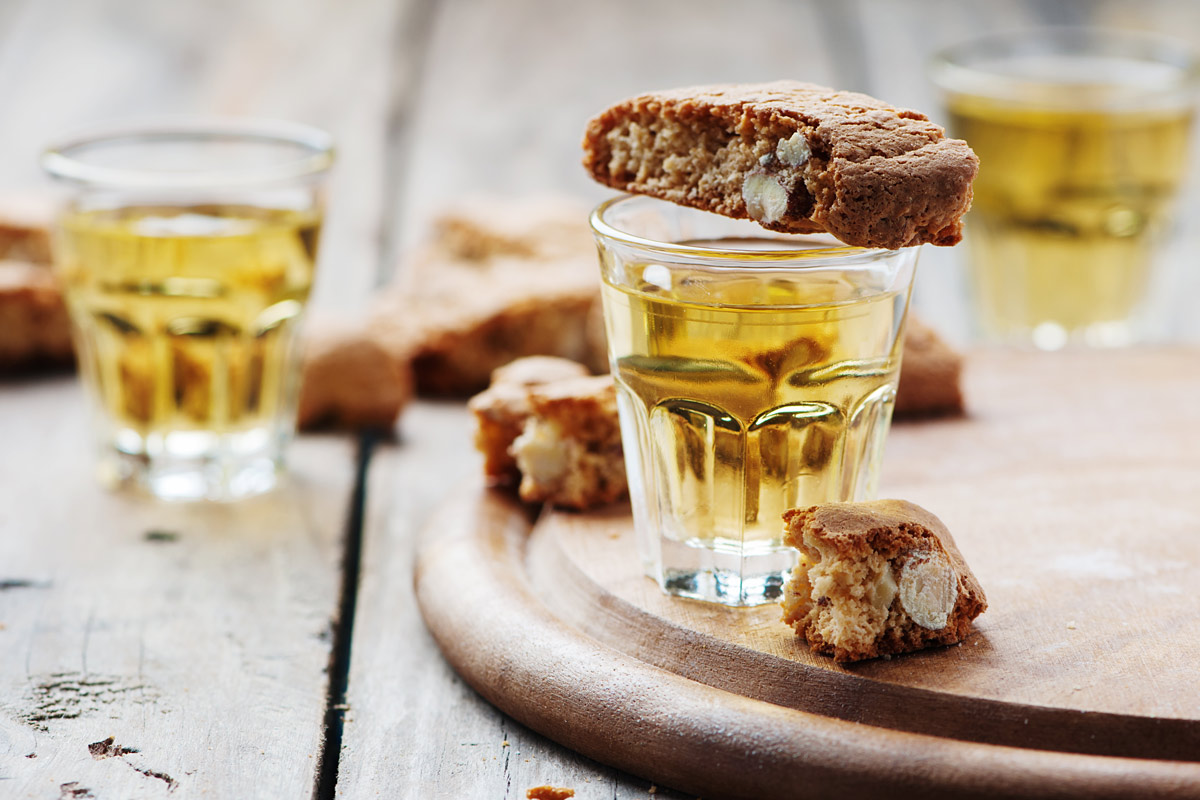 Trippa, or tripe in English, may not be for everyone, but despite its unusual nature, it remains a staple of Florentine cuisine. Made from one of the first three stomachs of a cow, Trippa has a subtly recognizable taste.  The texture of it is similar to calamari and it can be included in all types of dishes, hot or cold.

This summer dish has modest origins with the main ingredient being leftover bread.Historically speaking, field workers consumed it who stayed out all day. It’s easy to make and it tastes good immediately after you make it, as well as the next day. Tomatoes, cucumbers, red onion, basil, salt, pepper, vinegar and oil make up the traditional recipe.

These biscotti are typical of the Tuscan region. These cookies are made with almonds and are generally twice baked making them hard and very crunchy. Because they have an oblong shape they can be easily dipped into Vin Santo, the typical dessert wine of the region. You can often find these two items paired together on dessert menus in Tuscany.

The two closest airports to Florence are the Amerigo Vespucci airport (in Florence) and the Galileo Galilei airport in Pisa. Buses run between both airports in to the city center relatively frequently. The main train station in Florence is Santa Maria Novella which connects guests to other major cities in Italy.

Florence is a small and compact city so if you are staying in the center it is easy to get around by walking.  If you find yourself wanting to get from one side of the city to the other, buses are available that cross through the center. There is no need for a car, unless you plan to explore the surrounding areas.