A Guide to Italy’s Lakes 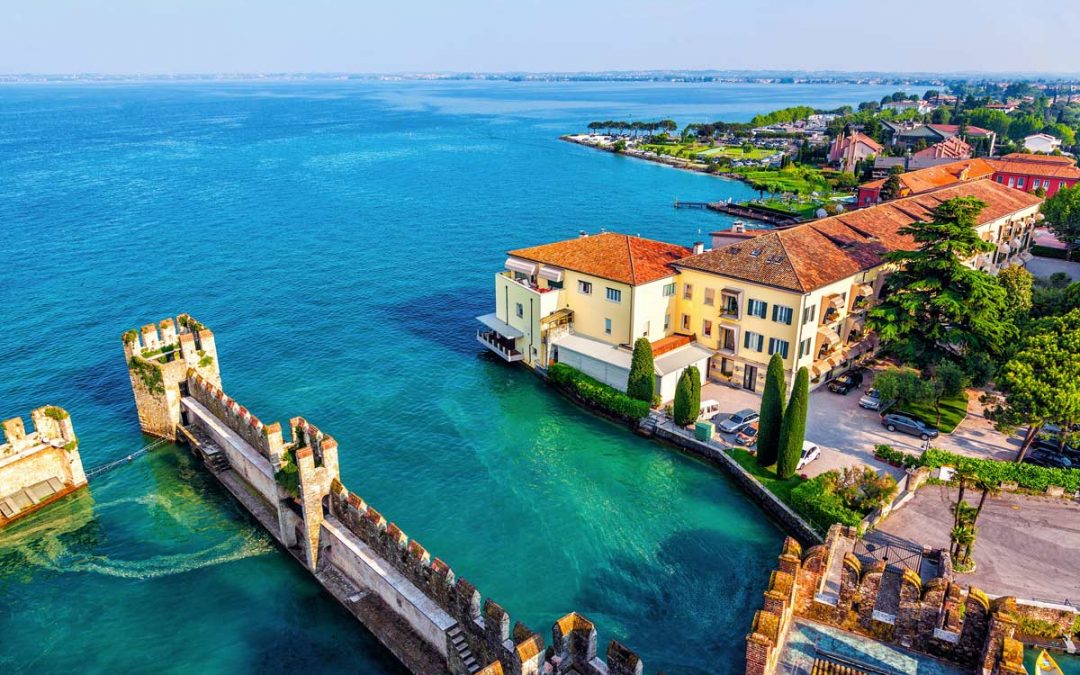 Italy’s landscapes have many different faces. They offer visitors impressive mountain ranges, rolling countryside, exciting cities, charming medieval borgos and beautiful coastlines. One of this peninsula’s most enchanting and breathtaking landscapes, however, can be found in its lakes. There are many such bodies of water throughout the country, though the most famous lie towards the North. Throughout the years these have been used as holiday spots, travelling shortcuts, pilgrimage destinations and even sights of ritualistic ceremonies. Our guide to Italy’s lakes will give you an overview of six of the most beautiful and popular lakes. Use these to help inspire your next Italian adventure, and to plan which direction it will take.

Depending on where you find yourself along the lakes’ coastlines, you will moreover find a large variety of shoreline landscapes. Some border imposing mountains, others beautiful villages and flood planes. Today, many of the lakes are popular holiday destinations for tourists and natives alike. Here you will find many water activities on offer, as well as hydrofoils that can take you across the lakes to many of the beautiful towns and islands on the water’s edge. Depending on the lake, and the area you choose to stay in, you can find varying degrees of seclusion and privacy. Any type of traveller will find something to their taste, with happening lakeside towns and cities with great connections to elsewhere in Italy, as well as tiny medieval settlements that welcome those looking for a relaxing, isolated sojourn. 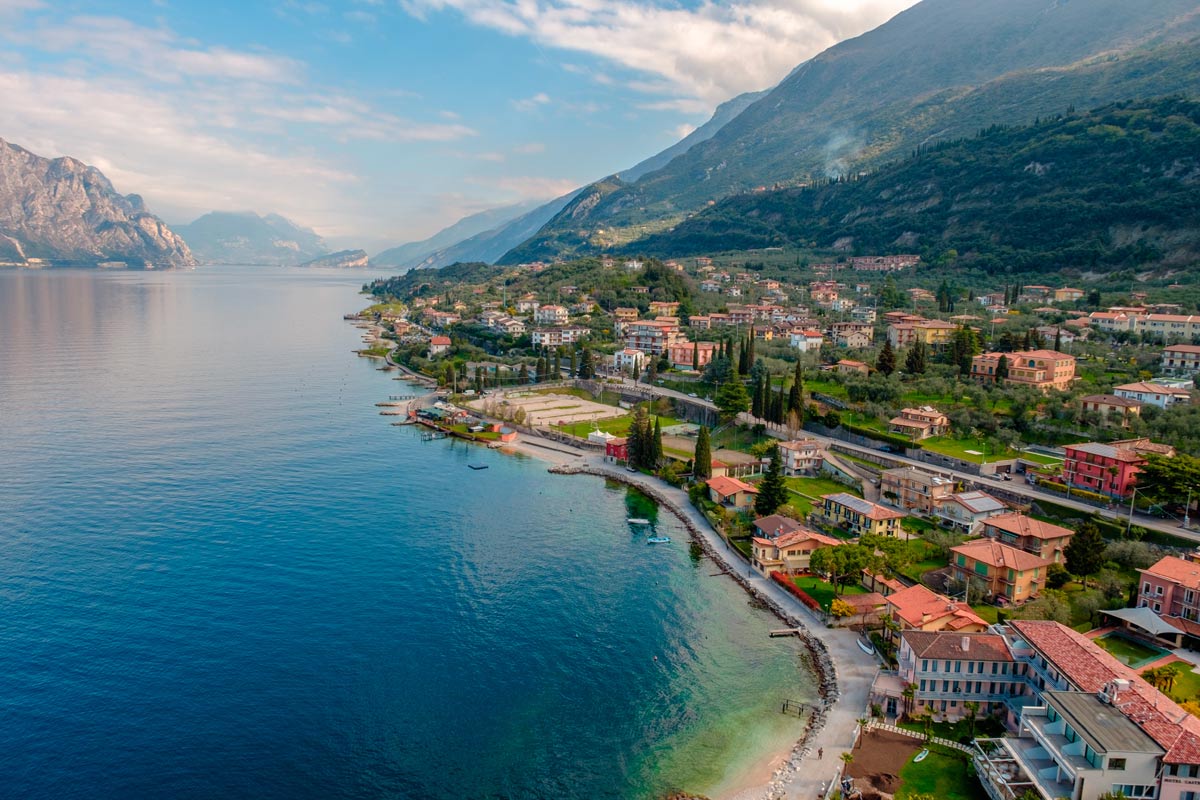 Lago di Garda, or Lake Garda, is Italy’s largest lake. Despite that, it is perhaps not its most famous, losing out to the nearby Lake Como and its celebrated lakeside villas. Lake Garda actually lies between three different regions, Lombardy, Veneto and Trentino-Alto Adige. This means it is home to an incredible cultural diversity, and attracts a mix of crowds.  To the north of the lake you will find alpine mountains that are brilliant spots for hiking and mountaineering. Towards the wider southern end of the lake, you will find flatter lands with more populous towns and tourist areas.

Within the lake you will also find many smaller islands, though there are five main islands that are well connected with the lake’s shoreline. The Isola del Garda is known for its Franciscan hermitage, thought to have been founded by St Francis himself in the early 13th Century. Others you can visit include the Isola San Biagio, Isola dell’Olivo, Isola di Sogno and Isola di Tremilone

Sirmione is perhaps the most popular, and thus perhaps most touristy, town on this lake. It is home to thermal pools and the ruins of a magnificent Roman villa. Nevertheless, it is best avoided in high season.

A great alternative to Sirmione is the picturesque Limone sul Garda. Still very popular, it is equipped with all the needed tourist facilities. That said, it manages to retain an authentic and charming atmosphere appropriate for its size. It is also famous for its many lemon groves!

For those looking for a slightly quieter ambiance, Torri del Benaco is a delightful small town that spreads around a harbor filled with small sailing and fishing boats. This medieval settlement makes for a nice change in pace from some of the lake’s more commercialised areas. 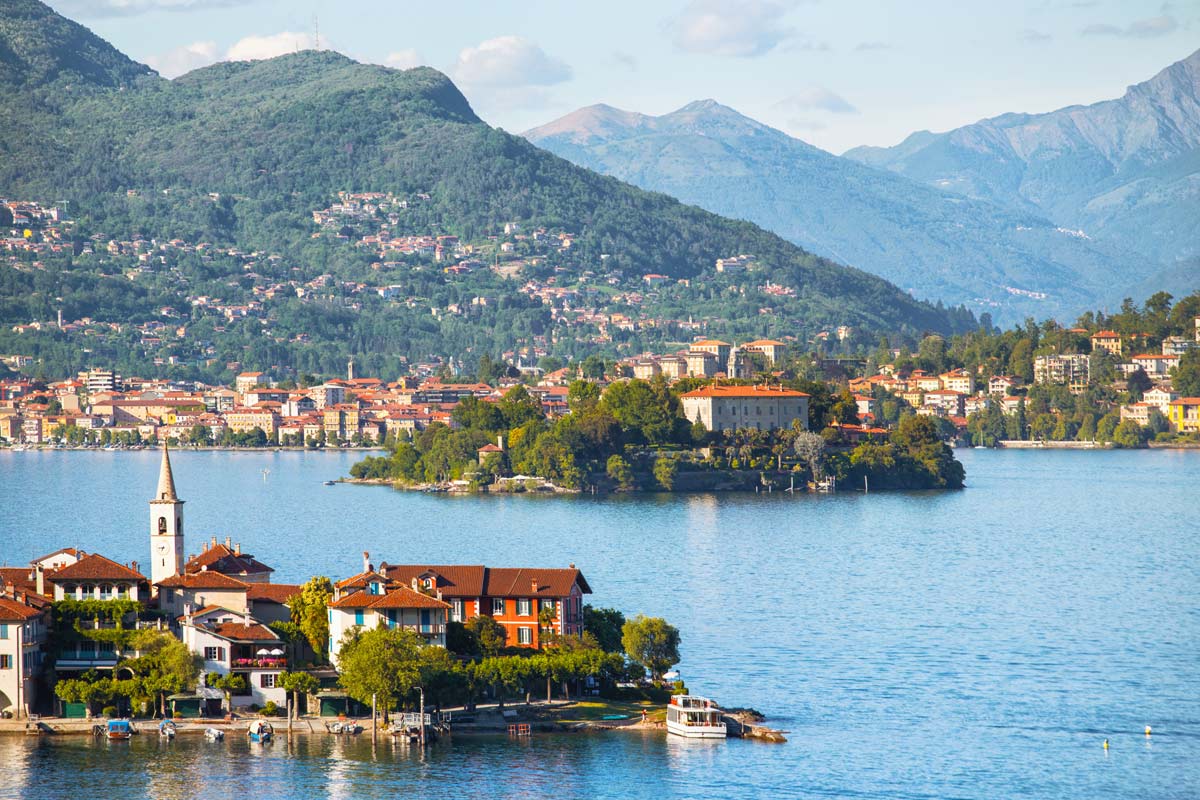 Lago Maggiore literally translates as “greater lake” and is sometimes also called Lago Verbàno in the local dialect. It lies in northern Italy, on the southern side of the Alps, and is the country’s second largest lake. It actually also borders the swiss province of Ticino, as well as the Italian regions of Piedmont and Lombardy. Despite its northern location, its climate is mild. In fact, part of what makes this lake so uniquely beautiful is the mediterranean vegetation that grows here in abundance.

Within the lake you will find the postcard-ready Borromean islands. The most famous is Isola Bella. This takes its name from Isabella d’Adda, the wife of Carlo III of the Borromeo family, who built a house palazzo in honor of his wife on this island. The other islands include Isola Madre, Isola Superiore dei Pescatori and Isola San Giovanni. Each has its own character and charms, and can easily be reached by hydrofoil from the lake’s edge.

For one of the best views in this region, you can take the Mottarone Cable car from Stresa’s Lido. This will take you up the Mottarone mountain from where you will have a simply unbeatable and unforgettable view. From here you can see seven lakes: Maggiore, Orta, Mergozzo, Varese, Comabbio, Monate and Biandronno. 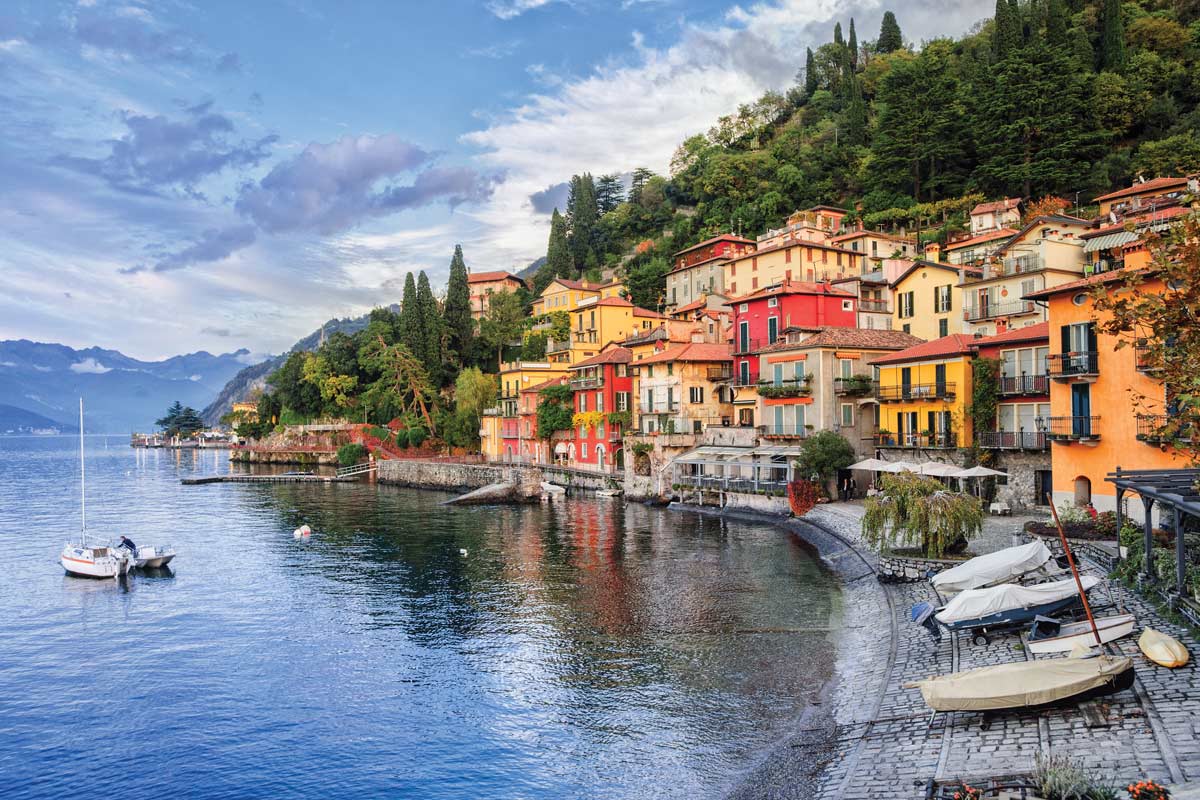 This lake is by far Italy’s most famous, not purely for its stunning landscapes, but also for its celebrated following. Icons such as Madonna, Gianni Versace, Sylvester Stallone, Richard Branson and George Clooney have all expressed there adoration of this particularly beautiful lake!

Like the above two, this lake lies in northern Italy, within the Lombardy region. This places it very near to the modern city of Milan, though the lake and its surroundings seem a world away from this bustling city. In fact, despite its incredibly popularity, the atmosphere of this lake is peaceful. Should you be coming from this city, however, you can take the train straight to the lovely Varenna. The colorful houses and beautiful lakefront promenade of this charming little fishing village are the perfect welcome to this lake.

All along its shores you will find prestigious villas and hotels, but also some charming villages and more affordable, family-friendly locations. What is more, you can easily reach the majority of Lago di Como’s most beautiful towns via hydrofoil or ferry across the waters.

For those who know America, Bellagio is a must-see town on this lake. It is, of course, the namesake of the world-class casino and hotel in Las Vegas. Here in Italy, however, Bellagio stands for something much different. It is a delightful small town that even in the Ancient Roman era attracted holidaymakers that had fallen in love with its picturesque landscapes. Lying opposite the Alpine side of the lakes, spending time at Bellagio’s seafront is breathtaking, especially come sundown. 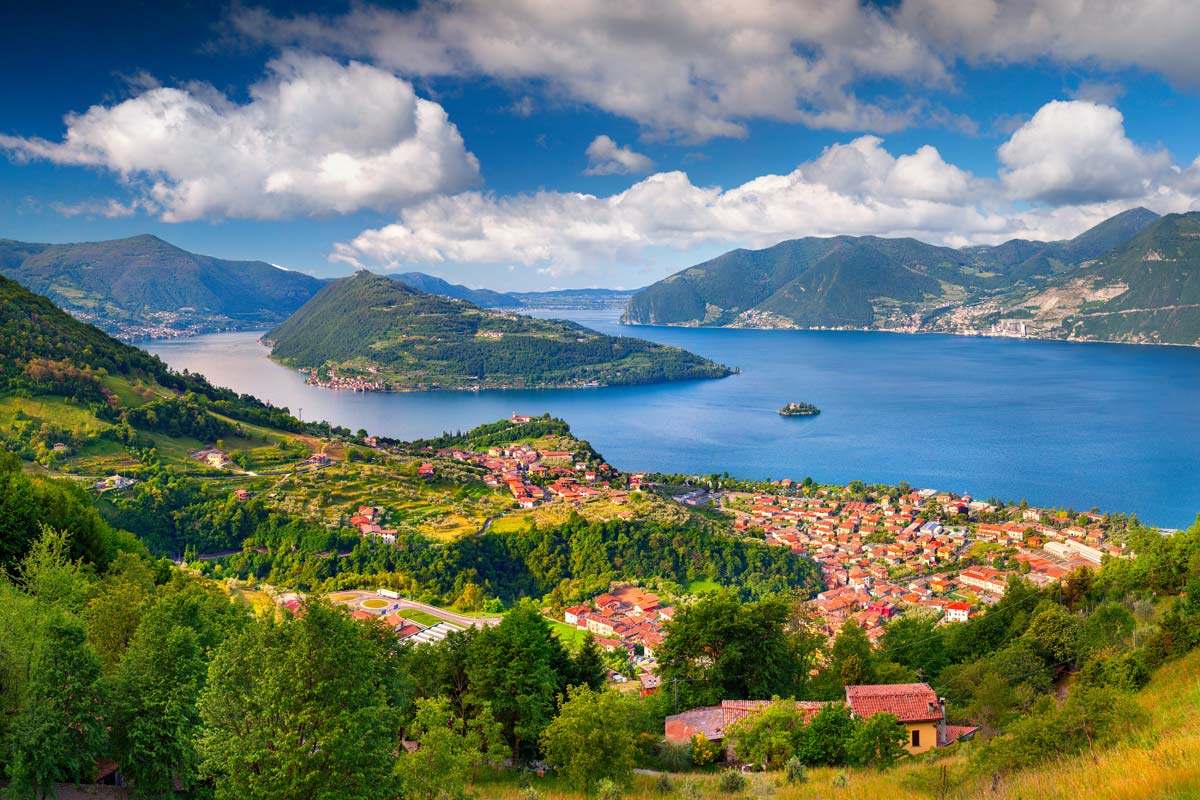 Lago d’Iseo is a little-known lake in the Lombardy region of northern Italy. It is much smaller than its bigger sibling Como, and yet it benefits from a distinct lack of the touristy bustle that pervade the latter. It is a great option for anyone looking for a quiet lake that stays out of the foreign tourists’ path, though the lake does bring many Italians to its shores come summertime.

This lake borders a landscape that, for the most part, consists of gentle hills and mountains, though nothing compared to those of Lake Garda and Maggiore. The lake takes its name from the largest of the medieval towns on it shores, Iseo. This and Sarnico are the two most populous areas, though Lake d’Iseo is also home to Europe’s largest lake-island community on its Monte Isola. The latter is a tranquil and charming area. It does not have cars, which makes for a truly serene town atmosphere. You can reach this and other areas around the lake by the small ferries that service each town.

Lago d’Iseo lies within the Franciacorta area of Lombardy. This is famous for its wines, so on the hills around the lake you will be able to spot many vineyards that enclose medieval castles and monasteries. 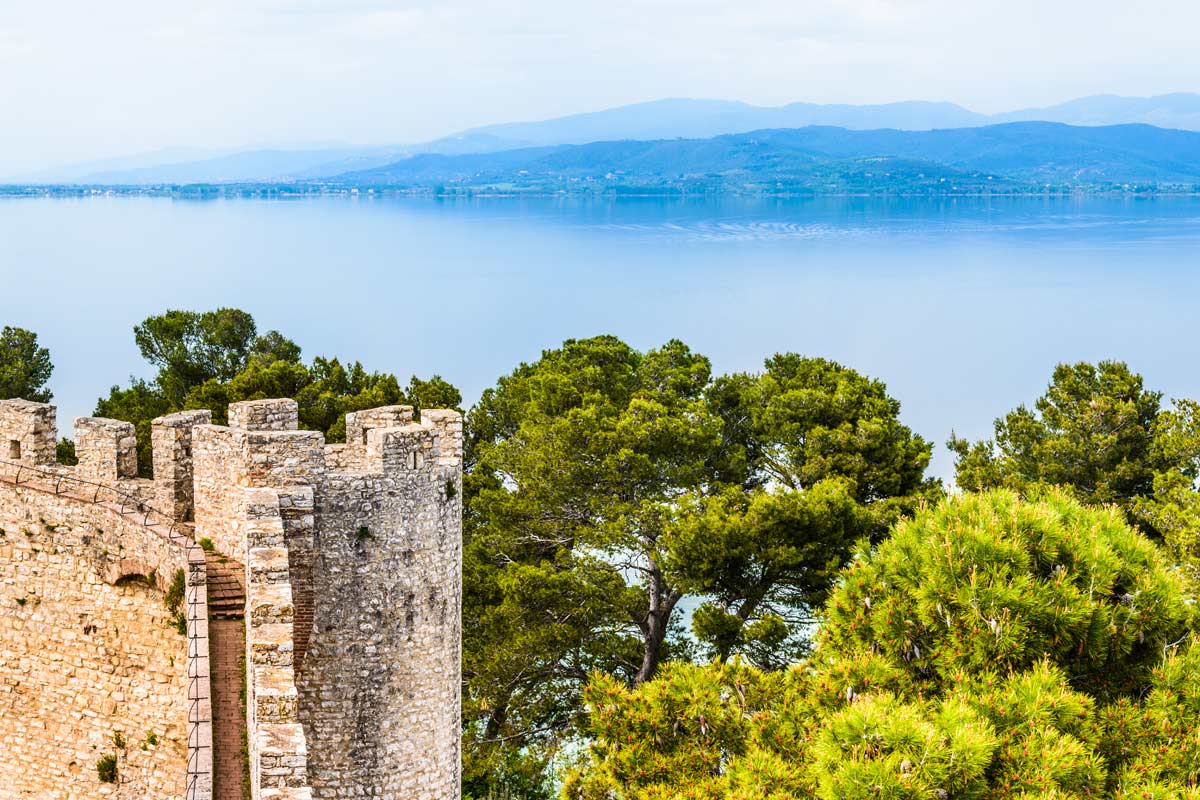 Lake Trasimeno in Umbria, making it the only one in our guide to Italy’s lakes that doesn’t to border the sea! Instead, it offers its visitors this alluring lake and its history that is still visible today. This lake, despite being Italy’s fourth-largest lake with a surface area of 128sq.km, enjoys a quiet and calm ambiance.

All around the lake and the surrounding area you will find rolling hills on which medieval castles and borgos perch. These all recall the lake’s strategic positioning within the country, and the time during which people exploited it for this location. Perhaps most notably, it is at this lake that Hannibal defeated the Romans in the 3rd Century BC.

The lake itself is relatively shallow, and features three islands: the Isole Maggiore, Minore and Polvese. None of these are particularly big, though they are worth a day-trip just to soak up their paradisal, nature-centred characters. Within four hours, for example, you can circle round the Isola Maggiore, the lush green interiors of the island on one side and the lake’s waters on the other.

A particularly lovely town on these shores is that of Passignano. This holds a typical ancient center; heading up past this you will also find some ruins to find an amazing view over the lake. Alternatively, Castiglione del Lago is a unique town on the lake’s eastern shores that nestles into the side of a cliff! 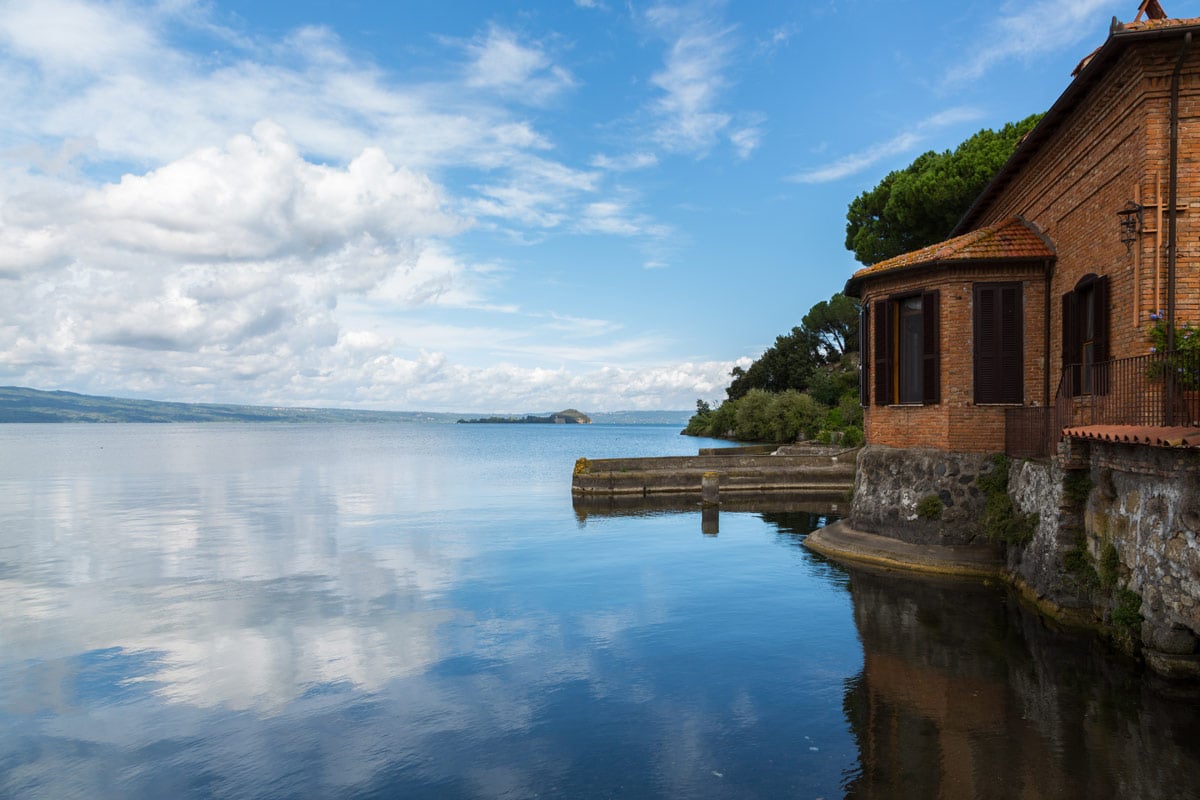 Lake Bolsena lies on the border between Lazio and Tuscany, and is only a short drive from Rome. The last in our guide to Italy’s lakes is actually a volcanic crater lake, which began to collect its waters almost 400,000 years ago. The vulcano itself, Vulsini, has not been active since the 2nd Century BC. As such, the volcanic complex is completely safe to visit. In fact, many people live on its borders all the year round. The two islands in the middle of the lake were in fact formed by underwater eruptions. These followed the collapse in the vulcano that initially formed the crater in which we now find the lake.

The name of the volcano comes from the latin volsinii which actually takes its name from the Etruscan city Velzna. This was actually the last Etruscan City to resist Roman Empire. Now called Vulsini, this town is on the border of the lake, though this is not its original position, which to this day remains unknown.

The main resort town, however, is Bolsena, from which the lake takes its name. In the Middle Ages this was widely recognised as a town of miracles! This is the most happening place on the lake’s shores, though there are many other localities that offer a slightly quieter atmosphere. Whilst in the area, you can also make a trip to the volcanic complex’s thermal baths and springs. The most popular and well-facilitated of these lie in the town of Saturnia. Here you will also find various spa hotels that can offer treatments and retreats.

The water itself is crystal clear and is home to many fish varieties. The beaches mainly consist of fine white sands, though not all of this lake’s towns have beaches to offer. Another part of the charm of visiting this area is the fact that it encourages a sustainable and ecological approach to tourism. This conveniently preserves as best as possible the natural beauty of the lake.